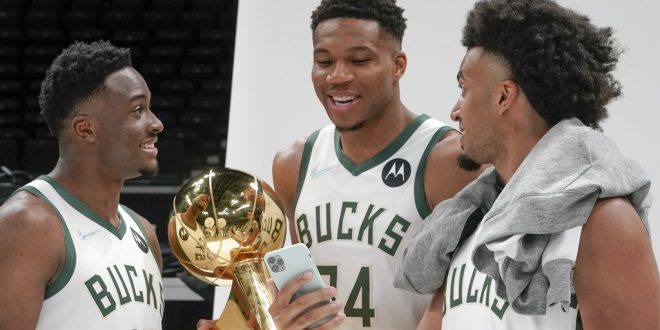 As the NBA season is less than a month away, teams are suiting up for their 2021-22 campaigns. On the heels of a truncated season due to COVID-19, training camps opened this week and teams from around the NBA met with the media ahead of October’s start.

The Milwaukee Bucks and reigning NBA champs are looking to repeat and will certainly need Giannis Antetokounmpo do so. Antetokounmpo knee injuries have been a problem in the past, but he said it is fine for now and he said he will be monitoring it through the preseason.

Moving over to the Atlantic Division, the Bucks will have to get by some pretty tough opponents to repeat. However, the Brooklyn Nets have experienced a couple of bumps of their own thus far with the New York vaccination requirements and Kyrie Irving’s absence.

Irving has not shown up to camp and chose not to comment on his vaccination status earlier this week.

However, one question was answered for the Nets: why Kevin Durant is called KD. When asked by David Letterman why he is nicknamed KD, he said the following.

“My first name is Kevin with a K and my last name is Durant with a D.”

Letterman was also given permission to call Durant KD.

The Philadelphia 76ers are dealing with an issue as well with Ben Simmons. The previous number one pick and now disgruntled player wants nothing to do with the 76ers. Coach Doc Rivers and other team executives are confused about Simmons’s status.

Moving over to the Southeast, the revamped Miami Heat are excited to kick things off in October. Victor Oladipo, one of their recent acquisitions, is looking forward to the opportunity.

“I want to be one of the best comeback stories ever.” — @VicOladipo pic.twitter.com/oahFkkYR0A

Traveling North to Orlando, rookie Jalen Suggs gave his thoughts on the first day of practice.

“I was really just excited. I went out here early and got my work in, put a couple of shots up and went into the locker room for the last couple of minutes before we got started. I like to put on gospel music and kind of relaxed because I was a little too amped up.”

NBA squads all around the country are ready to go as opening night approaches on Oct. 19.
Share