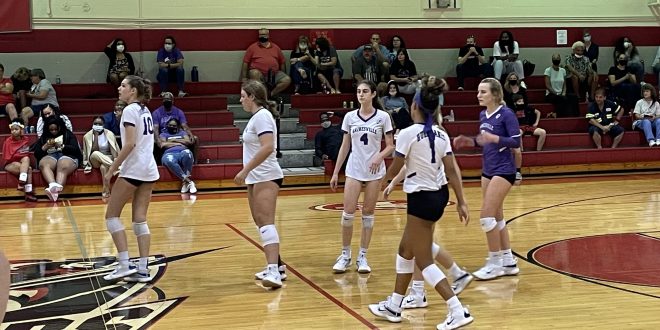 The Gainesville Hurricanes (11-8) were swept by the Santa Fe Raiders (15-3) on Tuesday night when they traveled to Santa Fe.

The Gainesville Hurricanes were without Gia McGrew who is one of their more integral parts of the team. Hurricane’s Head Coach Chancie Vice talked about how important she is to the team, but also why McGrew didn’t play.

“She is out with a minor injury, but I treat my girls like I treat my kids. They are human before they are players and her health comes first. Having her out we could definitely feel.”

Lethargic Start for Both Teams in Set One

A little under two weeks ago these two teams matched up in a high-energy game. Santa Fe was able to come away with the sweep as they traveled to Gainesville High School. This time the Hurricanes were hoping to return the favor as they made their way to Santa Fe.

There might have been some nerves carried into this game from the last time they matched up. It appeared as though neither team wanted to win by the way the match started with a series of errors and poor serves. For example, Santa Fe would miss a serve out of bounds and then immediately after Gainesville would gift the ball right back to them. This type of play would lead to the Hurricanes being down to the Raiders 8-10 early in set one.

Another good volley here from set one that went in the Raiders favor. pic.twitter.com/4FMex0550H

The Hurricanes and Raiders would play hot potato with the lead as time went on. Eventually, the score found itself at a 18-18 tie late in set one.

However, Santa Fe was able to push themselves to the finish line as they ended on a 7-2 run. This would lead to them winning set one with a final score of Raiders 25-20 Hurricanes.

Hurricanes Lag Behind in the Final Sets

Gainesville started the second set close. One good play from the beginning of this set was from outside hitter Meme Davis (#1) and middle blocker Ta’Niya Walker (#12). After a block and save from Davis, Walker smartly floated the ball back over the net to secure a Gainesville point.

Looking through footage from tonight’s Santa Fe Raiders vs Gainesville Hurricanes volleyball game and there were some positives from this game and here is one of them. pic.twitter.com/VBKQauzhKR

Despite this close start, Santa Fe was able to push away and take a commanding lead. A contributing factor to this was due to the Hurricanes committing errors. Gainesville found themselves in a seven-point deficit as the score was 13-20.

The final score of the second set would be Santa Fe Raiders 25-18 Gainesville Hurricanes.

To begin the third set, Santa Fe jumped out of the gate quickly with a 4-1 lead and forced an early timeout from Gainesville. They would extend the lead even further over Gainesville with a score of 15-8.

The common theme in every set was unforced errors and mistakes which continued into set three.

Give the Raiders credit where credit is due, but neither team was on their A-game tonight when it came to serving and controlling their offense.

However, Santa Fe would jump out to an 18-10 lead and would not look back.

The third set ended in favor of the Raiders with a final score of 25-15 Hurricanes.

Hurricane’s head coach stated that her team is usually a great serving team. Unfortunately, her team tonight did not show that.

Despite this, Coach Vice said that she was proud of how her team played.