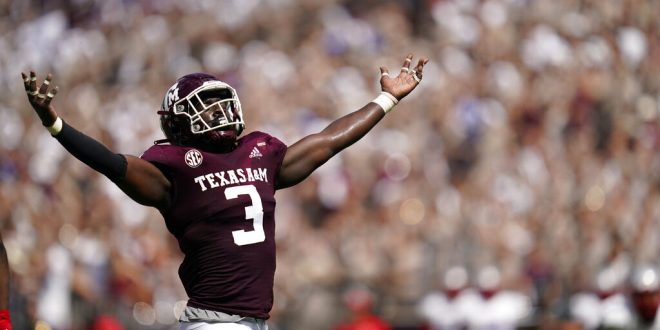 The Texas A&M Aggies will host SEC opponent Mississippi State on Saturday at 7 p.m. Both teams will be looking for their first SEC win.

The Aggies will attempt to bounce back from their loss to Arkansas last week. The loss was the teams first of the season.

Head Coach Jimbo Fisher had this to say about the team’s loss:

Arkansas jumped out to an early 17 point lead with just under 14 minutes left in the second quarter. The Razorbacks would only score three more points the rest of the game.

The Aggies defense gave up two big plays on back to back possessions that gave Arkansas a comfortable cushion. KJ Jefferson completed an 85 yard pass to Treylon Burks for a touchdown late in the first quarter.

Jefferson would throw a 48-yard touchdown pass to AJ Green on the next possession.

After that, the Aggies defense seemed to figure it out. While they gave up 443 yards, the defense only gave up three points in the second half.

The Aggies were averaging about 28 points a game coming in to their matchup with Arkansas.

Zaza Calzada, who came in for injured starter Haynes King in week one against Kent State, had totaled 458 yards and four touchdowns before Saturday. After throwing an interception on his first pass attempt in week one, Calzada did enough for the Aggies to beat Colorado and New Mexico.

HE LAID OUT FOR IT

Montaric Brown with a clutch INT for @razorbackFB pic.twitter.com/sAKg1XcVMB

The Aggies’ lone touchdown came in the third quarter when running back Isaiah Spiller broke free for 67 yards.

As for the teams upcoming match up with Mississippi State, Fisher says his team is ready to respond from the loss.

The Bulldogs are trying to get back in the win column. After starting the season 2-0, Mississippi state has dropped back to back games to teams with the nickname Tigers (Memphis and LSU).

The Bulldogs are also averaging about 28 points a game. Scoring is not the issue. Defensively, the team has struggled giving up 28 or more points in three of four games.

Quarterback Will Rogers has thrown for 1,454 yards with 11 touchdowns and two interceptions. He carries much of the offensive load with his arm as the Bulldogs have totaled just 251 yards on the ground.

Makai Polk from Mississippi State is currently leading the SEC in receptions (33) and is 5th in receiving yards (304) thanks to his connection with Will Rogers #devy pic.twitter.com/5NZ5hZMUOU

The sophomore will be in for a test, when the Bulldogs travel to College Station to face the Aggies at Kyle Field.

Head Coach Mike Leach said he understands his team is walking into a hostile environment a tough place to play.

However, he said he believes Rogers will be fine.

Trey is a third year sports media major at the University of Florida, and a WRUF reporter.
@@treyboogie5
Previous No. 22 Gators Volleyball Sweeps Georgia
Next Rays Clinch Top Seed in AL Playoffs