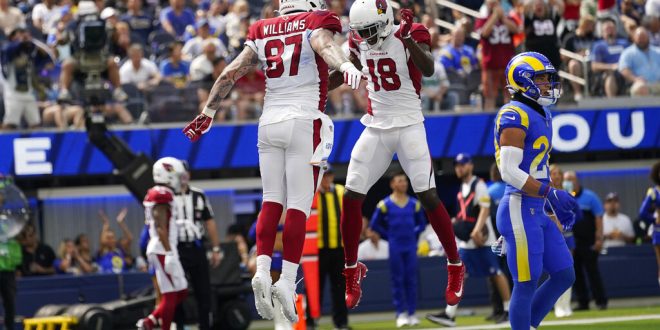 An exciting week four of NFL action wraps up Monday night with a battle for AFC West supremacy between the Chargers and Raiders.

The 2-1 Chargers will look to hand their division rivals, the Las Vegas Raiders, their first loss and take the early lead in the division.

Four games into the season teams are starting to define themselves. Multiple teams made statements that they are going to be serious contenders in 2021.

Here are a few of the biggest headlines from week four around the NFL.

After the Rams made a statement in week three, the Cardinals answered back with one of their own in week four.

Arizona went into Los Angeles and dominated their division rivals, leaving with a 37-20 win.

The Cardinals are now 4-0 and sit alone atop the NFC West after handing Los Angeles their first loss.

Kyler Murray looks like an early favorite for MVP after another stellar performance.

The Rams were widely anointed as NFC favorites after their win over Tampa last weekend, but the Cardinals’ victory suggests they may be among that group as well.

They host another division foe, the San Francisco 49ers, next week as they look to go 5-0. Head coach Kliff Kingsbury said they still have a long way to go despite the strong start.

The matchup seemed like an opportunity for both teams to assert themselves as contenders in the NFC. The Panthers were off to a surprising 3-0 start and the Cowboys’ only loss was in a battle to the Super Bowl Champion Buccaneers on opening night.

Dallas emerged as the team that seems like a true contender in the NFC.

They dominated Carolina, leading 36-14 through three quarters. It was only thanks to two fourth-quarter touchdowns by the Panthers that the score line looked respectable.

Prescott has had a tremendous start to the season after returning from a gruesome ankle injury last year. He has been extremely efficient, completing 75.2 percent of his passes and throwing 10 touchdowns compared to just two interceptions.

The six-year veteran said postgame he learned a lot from sitting out most of last season.

The Cowboys finish up a three-game homestand next week against the New York Giants.

Steelers Get Packed Up

Nothing has gone well in Pittsburgh to start the season. The Steelers are off to a very disappointing 1-3 start after Sunday’s 27-17 loss to the Packers.

Quarterback Ben Roethlisberger has shown his age so far this season and it looks like this year may be it for Big Ben.

The 39-year-old Roethlisberger is completing 64.1 percent of his passes but his four touchdowns match his interception total on the season. The Steelers are 27th in total yardage (301.8 YDS/G) and 28th in points per game (16.8).

Meanwhile, a defense that was expected to be among the best in the league has been very mediocre. The Steelers are 16th in total defense–allowing 357.8 yards per game–and 13th in scoring defense, allowing 23.3 points per game.

On the other side of the field, the Packers have bounced back with force from a terrible week one loss to New Orleans.

The Packers have won three straight by a combined 30 points and have sole possession of first place in the NFC North.

Aaron Rodgers is off to another great start, though he’s not throwing for a ton of yards. He is completing 64.5 percent of his passes and has thrown eight touchdowns and two interceptions, but is averaging just 224.3 yards per game. He ranks 26th among all quarterbacks in total passing yardage on the season.

The Pack will look to keep it rolling next weekend when they head to Cincinnati to take on the 3-1 Bengals.