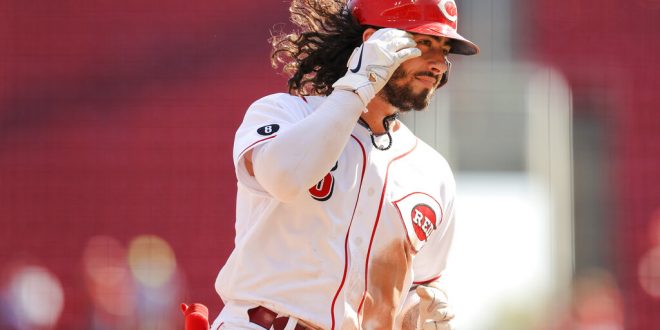 Cincinnati Reds' Jonathan India fixes his hair as he runs the bases after hitting a two-run home run during the seventh inning of a baseball game against the Pittsburgh Pirates in Cincinnati, Monday, Sept. 27, 2021. (AP Photo/Aaron Doster)

As the MLB Postseason starts tonight, there were a few notable Florida Gator Alumni that had great seasons for teams throughout baseball. Harrison Bader of the St. Louis Cardinals, Anthony Desclafani of the San Francisco Giants, and Mike Zunino of the Tampa Bay Rays are on postseason rosters, but a lot more Gators played during the regular season. In the first full season back after COVID-19, past Florida Baseball players took advantage of the opportunities.

Polar Bear Pete batted .262 and hit 37 home runs, driving in 94 runs. Alonso made headlines in July after breaking the HR Derby Record en route to becoming the back-to-back champ.  While Alonso’s Mets had a disappointing season, he had a great year in the Big Apple.

Jonathan India was originally signed by the Milwaukee Brewers in 2015 but went to UF for a few years before getting picked 5th by the Cincinnati Reds. After a couple years in the minors, India made his Major League debut on Opening Day earlier this year. The potential NL Rookie of the Year had a standout year for the Reds. India played the infield and hit 21 home runs with 12 stolen bases as well.

His name is @JonathanIndia… also known as future NL Rookie of the Year. pic.twitter.com/bYnGm9mamg

Kowar was named the Kansas City Royals’ 2021 Minor League Pitcher of the Year after going 9-4 with a 3.46 ERA in 16 GS. However, once Kowar came up to the big leagues, he struggled with an 11.27 ERA, going 0-6 in nine games started. When on Florida, Kowar earned the save in the 2017 College World Series championship game.

Throughout the MLB, 14 former Gators appeared on 26 rosters during the season, with three featured in the 2021 Postseason.