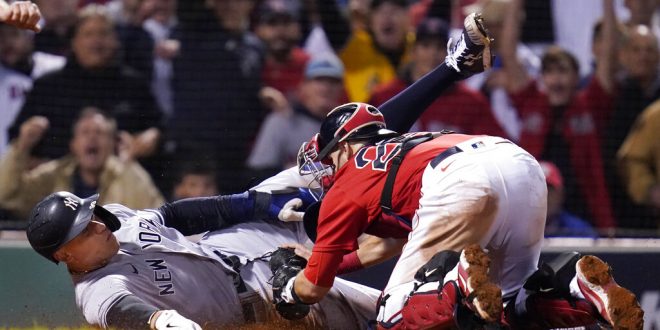 New York Yankees' Aaron Judge is tagged out at the plate by Boston Red Sox catcher Kevin Plawecki as he tries to score on a single by Giancarlo Stanton in the sixth inning of an American League Wild Card playoff baseball game at Fenway Park, Tuesday, Oct. 5, 2021, in Boston. (AP Photo/Charles Krupa)

The Boston Red Sox defeat rival New York Yankees to advance to play the Tampa Bay Rays in the American League Divisional Series. A winner-take-all in the AL Wild Card Game, the Sox beat the Yankees, 6-2, at home.

Entering the game, both teams finished the regular season with identical records of 92-70. However, Boston won the season series, owning the tie breaker with the Yankees.

Despite clinching home field at the end of the regular season, Boston still entered Tuesdays matchup as underdogs.

The Yankees bested the Sox a few weeks prior, sweeping Boston on the road at Fenway Park. After Aaron Judge hit a two-run go-ahead double in the eighth, the Yankees completed the three-game sweep.

Unfortunately, the men in pinstripes weren’t able to continue that momentum as starting pitcher Gerrit Cole continued to struggle at Fenway.

Three-time All Star Xander Bogaerts rattled Cole early, hitting a two-run home run in the first inning. The early homer was telling sign for a difficult but short night for Cole.

Bogaerts discussed the early score and how it was a nice way to get the game started.

To continue, left fielder Kyle Schwarber launched a solo home run at the top of the third to put the Red Sox up, 3-0. But, Yankees manager Aaron Boone felt it was still to early to pull the plug on Cole.

Until, a single by Kiké Hernandez and a Rafael Devers walk in the third, just like that Cole was benched.

On the other side, Boston’s ace pitcher Nathan Eovaldi played well through 5.1 innings, striking out eight.

Also, Bogaerts believed that Cora made all the right moves.

This energy right into the ALDS. pic.twitter.com/oOOrhGvZng

The Yankees scored one run after a Anthony Rizzo solo homer in the sixth inning. However, they didn’t score another until the top of ninth as probability of advancing to the next round dwindled.

Despite losing Tuesday’s one-game showdown after being favorited, Boone says he doesn’t regret any lineup changes. In fact, it is unclear rather not Boone will return as the teams manager next year since his four year contract expires.

Boone did say he enjoys being apart of the organization however, hasn’t participated in any talks with the ball regarding his future.

Now, the Red Sox look ahead to facing the Rays in the AL Divisional Series which begins Thursday at 8 p.m.