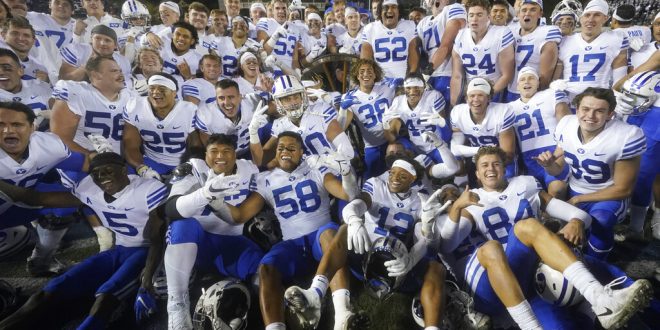 No. 10 BYU looks to stay undefeated

As the first half of the 2021 college football season concludes, one of the biggest surprises has been the BYU Cougars. After an incredible 11-win season in 2020, BYU was expected to take a dip in production following quarterback Zach Wilson’s departure to the NFL. However, the Cougars (5-0) have continued to build off of last season and currently sit at No. 10 in the AP Top 25 Poll.

On Saturday, the Cougars look to continue their win streak and become bowl-eligible against fellow Group of Five school Boise State (2-3).

The Cougars began the season with three-straight wins over Pac-12 opponents, including a 26-17 upset over then No. 21 Utah, snapping a nine-game losing streak against their in-state rival.

The next week, they defeated then No. 19 Arizona State, which moved them up to No. 15 in the AP Top 25. With wins over USF and Utah State the following weeks, the Cougars have cracked the top ten.

This week, BYU hosts Boise State in a nationally televised game on ABC. Heading into the game, head coach Kalani Satake said he is looking forward to the challenge this week.

Breaking down the Broncos’ offense, Satake praised quarterback Hank Bachmeier for his athletic ability as well as the number of weapons they have.

The Cougars are favored by six points in the game. Coverage of the game starts at 3:30 p.m. on ABC.

One of the biggest question marks surrounding the Cougars at the beginning of the season was who would replace Wilson’s production. That question has been answered. Talented quarterback play and a strong rushing attack carry the Cougar offense.

Redshirt sophomore running back Tyler Allgeier continues to build off of a strong 2020 season, during which he ran for over a thousand yards with 13 touchdowns. Through the first five games, he ran for 569 yards and seven touchdowns. His most impressive performance came in last week’s win over Utah State, where he ran for 218 yards and three touchdowns.

Tyler Allgeier is on GO tonight🚦

Although productive, the injury bug has plagued the quarterback room for the Cougars in 2021. Redshirt sophomore Jaren Hall entered the season as the starter and played well for the first three games of the season. Leading the team to a 3-0 start, Hall threw for 561 yards and seven touchdowns against only two interceptions. However, bruised ribs have kept Hall out of the last two games. Redshirt sophomore Baylor Romney started the Cougars’ last two games and played well. On the season, Romney adds 495 yards and five touchdowns to the Cougars’ stats. However, he suffered a concussion during last week’s win over Utah State. Redshirt freshman Jacob Conover replaced Romney in the game and threw for 45 yards on five completions in his lone appearance of the season.

Heading into Week 6, Coach Satake said that all three quarterbacks are available and will decide the starter based on how practice will go.

Following Saturday’s game, the BYU Cougars take a two-game road trip against two power-5 schools. On Oct. 16, they travel to Waco for a matchup with Baylor. On Oct. 23, the Cougars take a trip North to take on Washington State. BYU’s full schedule can be found here.

In what has already been an exciting start to the 2021 college football season, week …