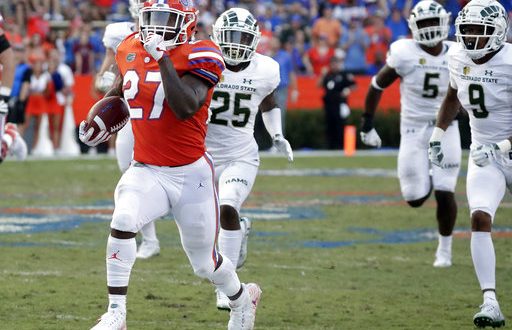 Share
Dan Mullen certainly has many options when it comes to his running back for the Florida Gators. However, it seems like any time he counts on Dameon Pierce, he is getting positive results.

The senior has been a part of a three-man committee but seems to have taken over as the short-yardage back. Despite being out-carried by Malik Davis by eight carries this year, 17 percent of his runs have gone for touchdowns.
He currently has 238 yards rushing and is averaging 5.8 yards a carry. Pierce also has 10 catches for 109 yards and a score. It has been interesting to see how Mullen has split the carries. He has three running backs in Pierce as well as Malik Davis and Nay’Quan Wright. Pierce has only received the most carries in one game, which was against Kentucky.
That was one of two games that he did not score a touchdown. Davis has received at least ten carries in three of his five games but missed the Vanderbilt game with an injury. Wright has gotten seven carries in four of the team six games in a year that the Gators have relied on the run more heavily than in 2020 with Kyle Trask.

Pierce and the Gators will get set to play LSU on Saturday, October 16th. Last year, in Florida’s loss to LSU, Pierce ran the ball eight times for 24 yards. LSU, though, has struggled defensively this season against the run. They allowed a season-high 330 yards given up last week against Kentucky and have allowed at least 115 yards in four of their six games. However, Pierce and the rest of the offense is going to have to neutralize the crowd noise, which they were not able to do Kentucky with their false starts.
Pierce has as many as 503 yards in a single season, and while it is unlikely to top that with the three-man backfield, Pierce has the potential to be a running back in the NFL. Whether he gets a chance as an every-down back or just near the goal-line, Pierce has an excellent future in front of him.
Share