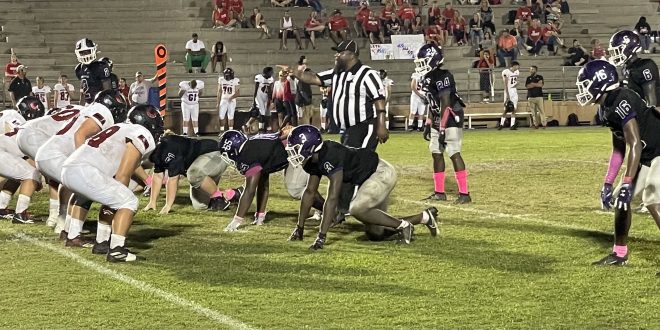 The Gainesville Hurricanes (5-2) pushed past the Middleburg Broncos (4-3) Friday at Citizens Field for Senior Night with a final score of 36-27.

For these seniors, it signified the end is near in their high school career. However, they showed there is still tons of fight left for this team in this home stretch of the season.

Coach Dock Pollard could not stress enough how important his seniors are to this team and how they helped rebuild it.

The Hurricanes would receive the ball to begin this game and wasted no time moving downfield.  Instantly, the Hurricanes found themselves on the Broncos’ one-yard line resulting from long runs from their halfbacks. Hurricanes’ halfback Kyree Edwards would finish off the first drive with a one-yard rushing touchdown giving the Hurricanes a 7-0 lead over the Broncos.

On the ensuing drive for Middleburg, they would take their time as they marched their way down the field. The Broncos halfback Mike Mitchell carried his offense down the field on the first possession for the Broncos and would finish it off with a touchdown of his own.  This score would make it a tie game halfway through the first, 7-7.

Gainesville would earn their way onto the opponent’s side of the field and score one last time in the quarter. Sophomore kicker Cooper Badics would convert a 42-yard field goal giving them the lead 10-7 over Middleburg at the end of the first.

After a tail off of offensive production in the second, the Hurricanes were provided with a spark for their offense. Middleburg began their possession pinned on their own five-yard line with a beautiful punt from Gainesville. Immediately after this, the defense lit up the halfback for the Broncos and would force a fumble, one of the lone turnovers forced in this game by the Hurricanes. Gainesville, rapidly, punished the Broncos for this mistake. Edwards, again, found himself in the green grass of the end zone. This extended the Hurricanes lead to 17-7 over the Broncos.

After a forced fumble from the @Canesville1900 defense, the immediately punch the ball in the endzone from 5 yard out.

The Hurricanes made one final push towards the end zone near the end of the second half that led to another 42-yard field goal from Badics. Making the final score at half Gainesville 20-7 Middleburg.

Although the defense for the Hurricanes started well in the first half, it was the total opposite to begin the third quarter. From the beginning of this quarter, the Gainesville team, overall, was sluggish. Even though they began the third with a 13-point lead they would quickly see this vanish.

It took Middleburg less than 20 seconds to score and their offense did not even touch the field. Middleburg returned the opening kickoff in the second half all the way for a touchdown with beautiful blocking and good maneuvering from the returner. This score brought life to both sides of the ball for the Broncos.

WOW! Starting off the half Middleburg’s kickoff returner just returned it for a touchdown! Additionally, they went for a 2 point conversion but failed.

Quickly, the Broncos defense was able to force a fumble while the Hurricanes made a strong push towards the end zone. Gainesville’s halfback fumbled on the Broncos four-yard line which gifting possession back to Middleburg.

Regardless of this turnover, the Gainesville defense stood tall. They would force a punt quickly after this turnover. The Hurricanes would score one more touchdown in the third coming from quarterback Shooby Coleman firing in a nice pass to Brent King in the end zone. Gainesville would lead 27-13 late into the third.

In less than a minute the Broncos would score two touchdowns. After a methodical and well ran drive from their offense that led to a touchdown, their defense would put them right back on the field. Shortly after this score, in Gainesville’s first play from scrimmage, they fumbled the ball right back to their opponent.

Straightaway, halfback Mike Mitchell hammered his way through the defense and would have one of the best plays of the night. He bounced off defenders and broke out a long touchdown run that would give the Broncos all the momentum heading into the fourth. The score would be tied 27-27 after these two scores and heading into the fourth.

Strong Finish for the Defense

Finally, the Gainesville defense we all love and know showed up. They began hounding to the ball and suffocating this Broncos offense to begin this quarter. Furthermore, they did not give up another point the rest of the fourth and became a brick wall.

Meanwhile, the Gainesville offense just could not find that final score to put the game to rest. Gainesville was up 30-27 after a field goal was converted halfway through the fourth. Then, one last final opportunity presented itself to put the nail in the coffin. Middleburg had just failed on fourth down and they had the ball in the red zone.

Hurricanes’ halfback Kyree Edwards would seal the deal for Gainesville as he scored one final touchdown for his team. Finishing the game off 36-27 after a missed PAT by the Hurricanes kicker.

This touchdown brought Edwards to a total of three touchdowns on the night. Coach Pollard gave high praise to his halfback and how important he is to the team.

Additionally, Coach Pollard talked about the resiliency of his defense.

Previous Dolphins Vs Jaguars Preview
Next Things get chippy in Gainesville as P.K Yonge picks up big win versus Wildwood