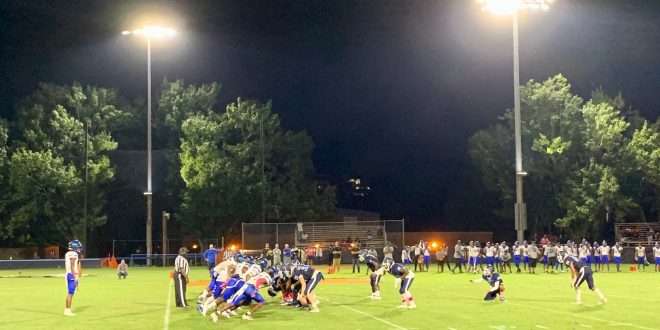 Up until the 0:24 mark of the third quarter, things had been normal—competitive, but normal.

Wildwood struck first early on, getting off to a quick 6-0 lead. P.K strongly answered, though, to the tune of two unanswered touchdown drives before the half—courtesy of rushes from quarterback AJ Small and running back Devin Pedro. Early in the third quarter, a six-yard touchdown run by quarterback AJ Small gave the Blue Wave a 19-6 lead.

At this point, it was three unanswered. Wildwood knew they had to turn up the energy and, regardless of how hard they thought they had been playing, simply play harder.

Two plays and eighty yards after that AJ Small touchdown, the Wildcats found the end-zone themselves.

A high-intensity, back-and-fourth ten minutes later, the teams found themselves in a 27-20 game with 2:41 left in the third. Down just one score, the momentum had completely shifted in Wildwood’s favor. Whatever knob got turned, whatever button got pushed, whatever it was that got this team riled up after going down early, it had lit a fire within that got them right back into this game.

The ensuing P.K Yonge possession, Wildwood forced a fumble for what was the second time on the night. This one, though, was absolutely huge. With all momentum and a nearly-visible aura of energy surrounding each and every Wildcat, they headed downfield to tie this thing up.

However, the Blue Wave defense had other plans. When needed most, in the biggest moment, they showed up. With massive stops on third-and-goal, then fourth-and-goal, with just over a minute left in the third, they had shot the Wildcats in the heart. They had busted the Wildwood bubble that was growing larger and larger. On that fourth-and-goal play that went on to have lost Wildwood the game, their intended receiver dropped the pass in the end-zone due to a monster hit by the Blue Wave.

This hit left that receiver injured on the field. and left the Wildwood coaches absolutely furious with the no-call. The hit changed the storyline of the game.

At this point, Wildwood was not happy. P.K Yonge had an opportunity to make this a two-possession game going into the fourth quarter.

At this point, you could see — but not quite make out what they’re saying — coaches on both sidelines yelling out to both the refs and to each other. Eventually, as refs worked to get the game moving on, a very loud, very clear, “shut the **** up” came from Wildwood staff in the direction of P.K Yonge’s. While what caused this to be exclaimed is unknown, the effect of it is not. Players rushed the field. Coaches did their best to pull them back. Multiple individual brawls broke out amongst the teams in all directions. Fans screamed from both bleachers. So many people yelling, so many whistles blowing, you couldn’t really make out any words. It was all just noise.

This went on for just a minute or two. The refs did a fantastic job calming things down.

Luckily, nobody was seriously injured. At least, not from anything outside of the game itself.

After penalties were assessed, the game went on.

“If y’all say anything to a dude in white, you will not be on my sideline.”

The tension continued between the teams early into the fourth. Nothing serious broke out, but you could just tell—players chatting between plays and getting, well, a bit extra physical as plays died down. A few more penalty flags were thrown to start the fourth.

P.K Yonge head coach Kevin Doelling could be heard on the sideline speaking to his team just over a minute in. It was clear that, for the fourth quarter, he wanted to see no more of the “extra stuff” that had come out of this matchup.

As the Game Winds Down

After fourth-quarter turnovers by both teams, and clutch defensive stops by the Blue Wave defense, P.K Yonge was able to close the game out 34-26.

As time dwindled to zero, you could hear opposing players chat at the line of scrimmage. Coaches urged and pulled players off the field.

“We needed that” seemed to be the sentiment amongst P.K Yonge fans after the win. This was undoubtedly a big win against a talented Wildwood team. Getting through games like this, against teams like this, is what makes a group better, closer, and most importantly, more confident.

On the field after the game, Coach Doelling took a few minutes to talk about keys to the game, as well as what exactly went wrong between the two teams in that late third/early fourth. He also looked ahead to next week’s matchup at Fort White.

Clearly, their coach takes responsibility for what occurred. Football is a game of passion and should be played like so, but a lot of what happened on the field tonight was just not necessary.

He seems to have a great grip on the team and a strong relationship with his players. They will look to grow from this as a group, get healthy and takedown Fort White next week.

Zackary is currently studying Journalism: Sports & Media at the University of Florida. He has years of experience providing multifaceted online content for various news outlets, as well as experience running multiple sports-related social media accounts with high followings. He is now doing work for ESPN Gainesville as a Sports Coordinator/Editor and Producer. He was a Staff Writer and Digital Content Creator in the past. Zackary's planned graduation is May 2024. Please feel free to contact via email at zackaryweiss@ufl.edu or zackweiss48@icloud.com. Links to Zackary's social medias are directly below.
@zackaryweiss_
Previous Senior Night Success for Gainesville
Next Pat Dooley’s Grades: Florida vs LSU