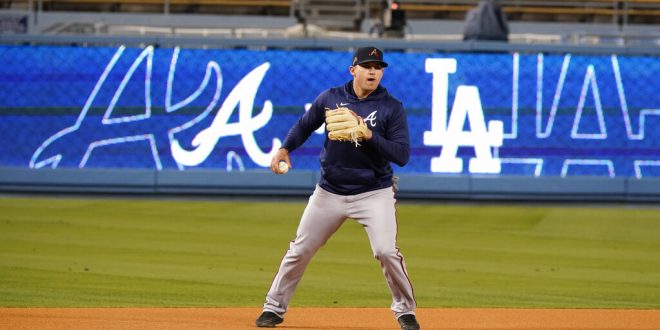 As the National League Championship Series shifts to Los Angeles, a pivotal NLCS Game 3 is on tap for this evening. With the Braves up 2-0, the Dodgers’ hopes for a comeback will have to start tonight.

Like last year’s NLCS, the Dodgers came into the series as favorites, yet the Braves have stormed out to a 2-0 series lead. Also like last year, we know the series cannot be said to be over until it is in fact over. It was at this point last season when Ian Wright started for the Braves and what followed was a 10-run first inning by the Dodgers as they got their first taste of momentum in the series.

Last year’s blown 3-1 lead is for sure hanging in the minds of players and fans of both sides, but this year’s Braves team is a more resilient one than last season. The Braves spent virtually the entire first half of the season under .500. In July, they lost franchise star Ronald Acuña Jr. to a torn ACL.

When all hope for the season looked lost, the Braves rallied together to take the division for the fourth straight year and are now back to the place they were last season. That newfound resilience has shown itself in games one and two. Both games were neck and neck, and both games saw the Braves win in walk-off fashion.

As the series shifts to Los Angeles, however, this presents the Dodgers’ chance to rally back into the series. The Dodgers posted a 58-23 record at home during the regular season, the best in baseball. In addition, the Braves have lost seven games in a row, and 10 of their last 11, at Dodger Stadium. Despite having a better record on the road than at home this season, the Braves find themselves in probably the toughest place they can play in baseball. The managers have shared their thoughts on what the series moving to Los Angeles means.

The Braves start RHP Charlie Morton for his first start since NLDS Game 4. In his two starts this postseason, Morton has thrown 9.1 innings, recording 14 strikeouts and a 3.86 ERA. The 37-year old veteran has proven himself to have been a great pickup for the Braves. He possesses now 14 years of MLB experience, which has rubbed off on the Braves’ young pitching staff. In addition to that, he has proven himself to be an ace alongside Max Fried.

For the Dodgers, they turn to RHP Walker Buehler. The righty finds himself in a must-win spot. With Max Scherzer not available until at least game five, a loss tonight means the Dodgers would have to play a do-or-die game without either of their aces. Buehler has made two starts this postseason and brings 10 1/3 innings pitched and a 3.38 ERA into game three.

The Braves bring the same starting lineup as they did for games one and two. Eddie Rosario, the game two hero for the Braves, remains in the leadoff spot. Despite hitting the home run to win the NLDS for the Braves, Freddie Freeman is hitless in series. Austin Riley and Joc Pederson hold the middle of the order, with both of their bats having shown clutch hitting this postseason.

The Dodgers’ lineup sees the return of Justin Turner to the order after he was on the bench in game two due to a neck injury. The day off possibly allowed Turner to regroup himself. The third baseman is usually one of the Dodgers’ best bats in the postseason, yet he is hitting .107 this October.

The top four lineup spots remain unchanged, with Mookie Betts and Corey Seager leading the way. Chris Taylor slides down to the number eight spot and moves out to left field, meaning AJ Pollock is on the bench tonight.

Time, Place, Where to Watch

Game three is set to start at 5:08 p.m. ET from Dodger Stadium in Los Angeles. Live coverage can be found on ESPN radio starting at 4:30.

Jack Shivertaker is a senior at the University of Florida pursuing a degree in Journalism with a focus on sports media.
@JackShivertaker
Previous WSU Head Coach Fired After Not Receiving Shot
Next Gamecocks WBB Head Coach, Dawn Staley, Highest-paid Black HC