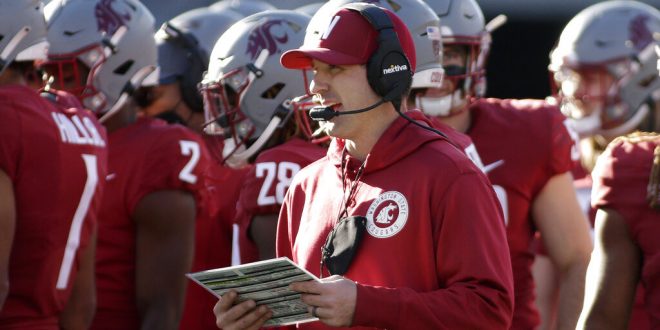 Washington State defensive coordinator and linebackers coach Jake Dickert, center, stands on the field during a break in play in the second half of an NCAA college football game, Saturday, Oct. 9, 2021, in Pullman, Wash. Dickert was named Washington State interim head coach, Monday, Oct. 18 after head coach Nick Rolovich was fired for refusing a state mandate that all employees get vaccinated against COVID-19. (AP Photo/Young Kwak)

Nick Rolovich has been been relieved of his duties as Washington State football head coach after refusing the Covid-19 vaccination.

Nick Rolovich has been terminated by Washington State, per a university source.

Terminated for cause, along with the other unvaccinated WSU assistants.

Rolovich refused it despite the required state mandate. The University confirmed its decision Monday evening, and also revealed its expulsion of four other members of the coaching staff for not complying. These include Ricky Logo, John Richardson, Craig Stutzmann, and Mark Weber.

Washington’s Governor Jay Inslee required state employees to have both doses of the vaccine by Monday in order to save their positions.

He had a contract with the school that lasted up until June 2025, but it stated that he could be fired on the grounds of legal cause, such as not complying to WSU policy. Rolovich was on a $3.1m salary. He tried to get an exemption for religious reasons, but the University’s Director of Athletics, Pat Chun, explained that the appeal had been denied.

Rolovich led his team 4-3 this season so far after winning their last 3 games. The Cougars are coming fresh off a 34-31 win Saturday after facing Stanford. However, WSU still has five matchups left to finish out the regular season.

Defensive Coordinator Jacob Dickert is taking over as interim head coach. He will lead the team into Saturdays game against Brigham Young.

☑️ 2nd Shot Complete. We all have a choice, but I am Proud to do my part to #StopTheSpread and can’t wait to see fans at Martin Stadium this fall. pic.twitter.com/O4hTEhiRyU

This has been a constant battle for months. It started back in July when Nick Rolovich took to Twitter to discuss his stance on the vaccination. Pat Chun explains that this was an on going conversation.

Chun discusses the clear deadline the University set for its employees.

He talks about the plan moving forward, explaining that health and safety is top priority.

He refers to this as a disheartening day for the program.

The University is currently on the lookout for five new members of the coaching staff.

Sara Dastgerdi is a current student at the University of Florida.
Previous NBA Tips Off the Regular Season
Next NLCS Game 3 Preview

With the coronavirus jeopardizing college football in 2020, the Pac-12 and its coaches back an …