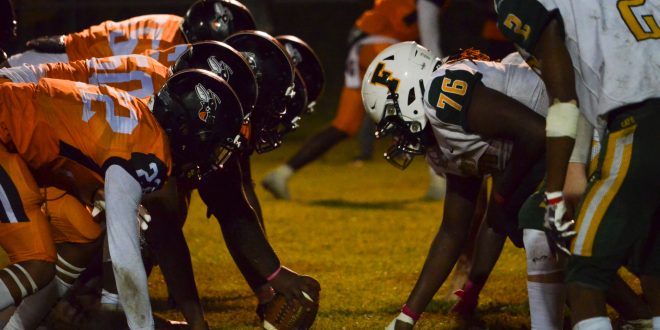 The Hawthorne OL lines up against Ocala-Forest.

For a team that has been so alive all season, Hawthorne started the game off looking extremely slow. The playcalling was there, but the offense simply wasn’t able to capitalize on critical plays.

Forrest attempted to shock the hornets early with a sequence of runs and screen passes led by Quarterback Stephen Curry. The Hawthorne defense held their own, and it quickly became apparent that this game would be won on the defensive side of the ball.

After a gridlocked first quarter, Hawthorne was finally able to put some points on the board with quarterback Tyler Jefferson throwing a ball to Devin Ray in the endzone. Jefferson would convert on the 2-point attempt and make the score 8-0.

The Wildcats attempted to respond quickly with a Curry throwing a sequence of slants to wide receivers Jamarrien Burt and Jabrel Samuel that moved the chains down the field.

The Hawthorne D was finally able to keep the opposing offense at bay, forcing a fourth-down attempt. Just as when the Hornet’s defense looked like they were going to get off the field, a pre-snap false start gave the wildcats another first down.

In the next set of downs, a sloppy decision by Curry with the ball would prove costly, as Atravis Mallary would intercept a pass and give the Hornets the ball back on offense.

Over the next few drives, Hawthorne simply couldn’t create offense. They opted to bring in senior quarterback Chaz Mackey, but the home team could not get going.

Throughout the second and third quarters, the Hawthrone defense shone brilliantly. The game was a chippy one throughout, but the Hornets used that to their advantage to keep the pressure on the Ocala offense. Senior LB Brian Hart was a nuisance all game and Junior DE Jailen Ruth helped continue to keep the wildcat’s offense under control.

In the middle of the third, the defensive struggle had finally given way and the momentum began to shift in the home team’s favor.

The @ocalaforestfb offense playing with a lot of guts, but it’s not enough as @HHS_Football352 forces a turnover on downs to get possession once again. @ESPNGainesville @GNVpreps @ThePrepZone

A big turnover on downs led to a compact drive for the Hawthorne offense. Quarterback Tyler Jefferson would punch in a running TD and make the score 14-0 midway through the third quarter.

Heading into the last quarter, the game got a little chippy between both teams. Hawthorne had been bailed out on a Forest unsportsmanlike just before. A similar string of penalties on the hornets had also hindered their offense. Penalties had plagued both sides all night, and early in the fourth, a scrap between the teams led to two players being ejected.

With under five minutes to play in the fourth Hawthorne finally stepped on the gas, and began to pull away. A touchdown scramble from QB Chaz Mackey made it a two-score game and Senior RB Brian James made it official when he scored a running touchdown to make the final score 27-6.

Hawthorne never looked like they were going to lose this game, but they faced a tough fight from the visitors. The Hornet’s offense was bailed out numerous times by their defense and struggled to light up on offense.

Numerous penalties were a big negative and it’s something that has to be cleaned up if this team wants to make a serious playoff push. At the end of the day, getting the win in a sloppy game is always positive, but expect Hawthrone to seriously analyze what went wrong as they look to take the next step.

Hawthorne has a bye next week before looking to face North Marion at home to end their regular season campaign. Ocala-Forest will return north to play Buchholz next Friday.

Previous Transfer McKissic is Excited to Be a Gator
Next St. Francis Academy falls to Oak Hall