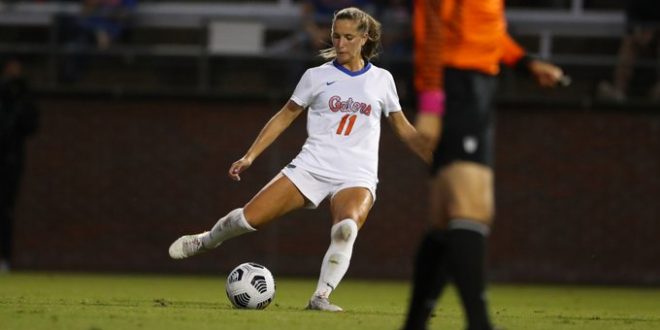 Pre-match and First Half

Florida came into the match still in play for a berth in the SEC Tournament. The Gators were tied with Texas A&M for ninth place, and were one point ahead of LSU, and three points ahead of Mississippi State. A win over South Carolina would guarantee the Gators a spot in the tournament.

Eager for the three points, the Gators were going to give it their all. It paid off for them as the Gators scored on one of their early chances in the 18th minute of the game. Madison Alexander scored with left-footed shot with assists from Georgia Eaton-Colin and Kit Loferski. Alexander had now scored her fourth goal in the last five matches and the Gators were up 1-0.

The lead was short-lived, however, as South Carolina answered with a goal of their own in the 33rd minute. Ryan Gareis received a pass from Claire Griffiths and sped down the side past defenders before taking a shot inside the box to score in the bottom-right corner. Just like that the score was 1-1 and it remained that for the rest of the half. Both teams had plenty of chances in the first half, with South Carolina taking six shots and Florida taking eight.

South Carolina received a corner at the beginning of the half, which led to an off-target shot. The team traded possessions for a while, before the first card of the match was issued. South Carolina’s Remi Swartz received a yellow in the 61st minute. Both teams continued going back and forth with chances, each team trying to find the goal to take the lead.

The Gamecocks found that goal in the 77th minute. Catherine Barry took the shot that found the net, with Claire Griffiths earning her second assist of the night. The score was now 2-1 South Carolina. The Gators tried to find the equalizer, but failed to register a shot in the remaining 13 minutes and the 2-1 score held for a final.

Looking Forward to the SEC Tournament

Despite the loss for the Gators, Texas A&M also lost. LSU also defeated No. 4 Arkansas 4-0 to slide into ninth place. Mississippi State defeated  No. 16 Ole Miss to create a three-way tie between Florida, Texas A&M, and Mississippi State for the 10th and final seed in the tournament.

The berth was given to the Gators. Florida had the best goal differential against common league opponents this season, so the Gators will go to Orange Beach.

The Gators play in the tournament’s opening round against the 7-seed and defending tournament champion Vanderbilt Commodores. The match will be on Sunday at 2 p.m. ET.

Jack Shivertaker is a senior at the University of Florida pursuing a degree in Journalism with a focus on sports media.
@JackShivertaker
Previous Buchholz Bobcats Take On The Forest Wildcats After Major Bolles Defeat
Next Brenton Cox Excited to Play Former Georgia Teammates