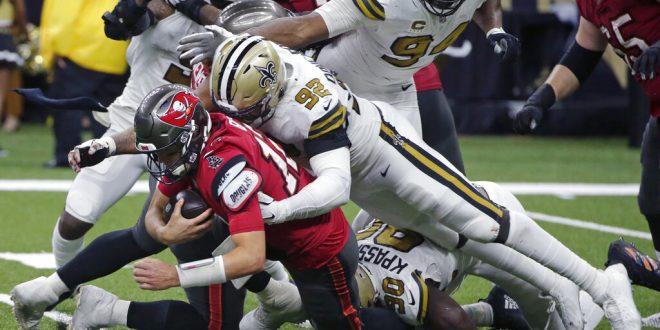 Bucs Fall to Saints on the Road

The New Orleans Saints might be the most surprising two-loss team in the NFL. Going into Sunday’s matchup against the defending Super Bowl Champions, the Tampa Bay Buccaneers, the Saints needed to stay hot. And despite an early injury, New Orleans were able to come up with a win over the Buccaneers.

Early in the second quarter of Sunday’s game, starting Saints quarterback Jameis Winston went down with a scary knee injury that could keep him out long-term. The former first overall pick was seen on crutches after the game.

Payton on Winston's injury "I think it's significant" pic.twitter.com/eg19MpgLFL

But with Winston’s injury, the Saints called on backup quarterback Trevor Siemian to run the offense. Siemian finished the game with 16 completions on 29 attempts with 159 yards and a touchdown. He also led five drives resulting in two touchdowns and three field goals. Also, All-Pro running back Alvin Kamara rushed for 61 yards and a touchdown on 19 carries.

Even though New Orleans eventually won by two scores, Tom Brady and the Bucs almost completed another comeback. After trailing 23-7 at the beginning of the second half, Tampa eventually gained a 27-26 lead in the fourth quarter. But despite Brady’s 375 yards and four touchdowns, his second interception of the day resulted in a touchdown. In turn, giving the Saints a nine-point lead.

“It was an embarrassing display of football,” Bucs head coach, Bruce Arians, said after the game.

Arians pointed to Tampa’s three turnovers and 11 penalties as a big reason for their week eight loss.

After this loss the Bucs fall to 6-2 on the season as they head into their bye week. With a week off, expect the Bucs to return to their premier form against the Washington Football Team in week 10. New Orleans moves to 5-2 after their win over Tampa. Next week, the Saints will take on the struggling Atlanta Falcons. But, with Winston out for the foreseeable future, the Saints have a lot of question marks surrounding their offense heading into the mid-point of the season.