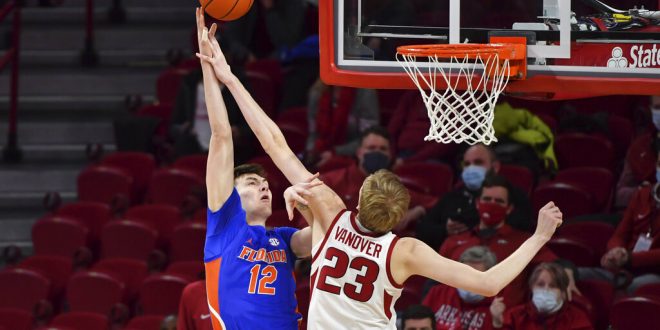 Out with the old, in with the new.  Many Florida Gators fans packed into the Stephen C. O’Connell Center Monday night to watch a team of players they were largely unfamiliar with.  Fan favorites Tre Mann, Scottie Lewis, Noah Locke and many others are all gone.  Now, mostly transfers make up a roster of players that will take the teams supporters some adjusting.  Even so, Florida emerged victorious in their opening exhibition defeating Embry-Riddle 80-57.

Point guard, shooting guard, small forward, power forward, and center.  Last night, a transfer filled all five positions in the starting lineup for the Gators.  Most notably, graduate guard Brandon McKissic from the UMKC Kangaroos lead the team with 20 points.

He rained in five threes and helped to electrify Florida after a sluggish first half.  Interestingly enough, he is known to be a defensive player.  If he can continue to both score and defend, he will be a huge factor in the Gators long term success.

Differently, some of the other newcomers struggled.  The normally lights out Penn State transfer Myreon Jones was ice-cold from behind the arc all game.

#Gators Brandon McKissic said Myreon Jones' 0-of-6 night from 3-point range an anomaly for Penn State transfer. 'The last night you see that happen. I'm going to hate to have to guard him at next practice. He's not going to miss a shot.'

Ultimately, it is going to take some time for the new-look Gators to gel and come together.  Gators fans are going to have to briefly temper their expectations and give the re-made team some time to develop chemistry.

Likely a result of all the new faces, the Gators started the game against Embry-Riddle shockingly slow.  At the break, they lead by only a mere six points.

In the second half, they flipped the switch.  The aforementioned newcomer Brandon McKissic and veteran Tyree Appleby sparked the offense.  During a 28-10 run that turned the games tides, McKissic and Appleby combined for 21 points.  After that, it was mostly smooth sailing.

To build upon last years NCAA Tournament Round of 32 exit, the teams transfers are going to have to step up and contribute.

The teams will head back to the practice for a week before the Gators open their season Nov. 9 at home against Elon.

William Silverman is a junior at the University of Florida from Philadelphia who is interested in pursuing a career in business, communications and journalism.
Previous Around the SEC: Week Nine
Next Gator Fans Question Mullen’s Recruiting Amid Back-to-Back Losses