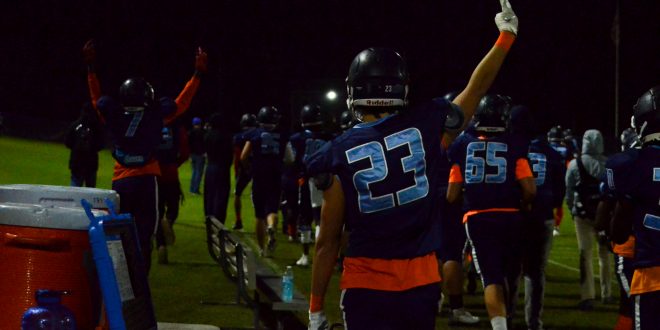 P.K. YONGE CAPS OFF THE REGULAR SEASON WITH A FRIDAY NIGHT WIN

The story of the first quarter was all about the run game. Keystone opted for the I-formation, constantly giving the ball to senior running back Dalton Hollingsworth. He drew up a string of solid plays, but the Indians were eventually stopped and forced to turn the ball over on downs.

Now with possession, The Blue Wave began their drive across the field. Senior quarterback AJ Small was on fire all night, as he helped spark up the offense. On a nervy third down, nothing seemed to phase the veteran QB as he stepped back and threw a 20-yard strike to wide receiver Jaren Hamilton. Once in the red zone, a handoff to Devin Pedro put the home team up 7-0.

It’s almost a botched punt, but Keystone gets it off.
P.K. driving now with 11:30 till half.

The start of the second quarter saw another huge throw from Small to Cameron Pedro move the chains for P.K. Yonge. Once inside the 20-,  a handoff to Devin Pedro finds the endzone for the second time. This extends the lead to 14-0.

After a series of stops from the Blue Wave defense, the already explosive offense was back on the field with time winding down before half. Almost immediately, AJ Small would break out for a 50+ yard run, and kickstart a drive that would end with a 1-yard rushing touchdown for KJ Wooden.

The scoring wasn’t over though. After getting a quick interception, the ball was back with the Blue Wave. A deep ball from Small connects with Hamilton for six, and the home team heads into halftime up 27-0. 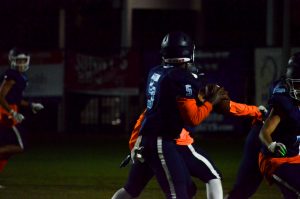 The Third Quarter was pretty dull for both sides. Each team would exchange unsuccessful drives and the score would remain 27-0 heading into the fourth.

Up until now, P.K. Yonge has dominated this game. If Keystone is going to do anything, it has to be now. The Indians offense has a series of good drives but just can’t convert for points. Eventually, a 17 yard rush from Kade Sanders finds the endzone and after a successful 2PT, the score is reduced to 27-8.

The ball now in P.K. Yonge’s hands, the Blue Wave should be in the driver’s seat to close out this win. However, a fumble gives Keystone the ball back with 5:41 to go. The Indians have some trouble but rush for another touchdown and make the score 27-14.

With less than two minutes to go, the score remained the same because Keystone couldn’t get the ball back. Just as he did two quarters earlier, AJ Small broke free on another QB-run and scrambled for 53 yards and the last touchdown of the night. This score would kill the visitors’ momentum entirely and prove the deciding blow in P.K. Yonge’s win.

As the Blue Wave gathered around at the end of the game, Junior cornerback Seth English stood up above the group and said “We Aint Done Yet!” A familiar saying of the postseason, it’s a promise often difficult to deliver on.

When asked about his team’s new motto, Coach Kevin Doelling said, “After three losses…You know losing to Hawthorne, losing to Union, losing to Baldwin. It’s not easy on any man’s psyche, but every Monday they’ve come back ready to get better, and I know they’re still hungry.”

Senior wide receiver Jaren Hamilton(#22) had this to say about the team’s next steps: “We just got to come back Monday, hungrier, like it’s the first week of football. We’re going into the playoffs so it’s all or nothing.” 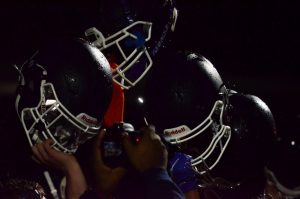