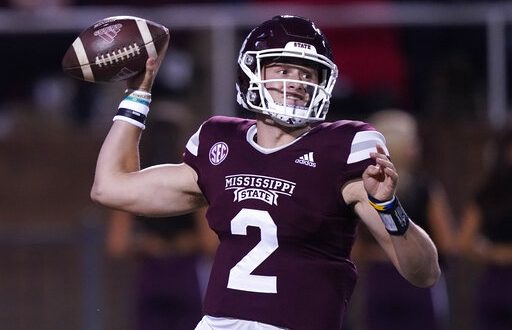 The Mississippi State Bulldogs will be looking for their third straight victory when they take on the Arkansas Razorbacks on Saturday. Mississippi State defeated Kentucky last Saturday, 31-17. Arkansas snapped a three-game losing streak with a 45-3 victory over Arkansas-Pine Bluff.

Arkansas runs the ball for just under 250 yards per game. They have three players who have carried for more than 400 yards this year. This includes two running backs and their quarterback, all three of whom are averaging more than five yards per attempt. Arkansas’s coach, Sam Pittman, plans to run the ball since it has proven to be successful.

The running backs, junior Trelon Smith and freshman Raheim Sanders are the two running options. They have combined for five rushing touchdowns while freshman quarterback KJ Jefferson has added five touchdowns of his own. The most impressive fact is that none of these players has had a rush longer than 42 yards. In addition, the Razorbacks have wide receiver , Treylon Burks, who had great downfield ability.

Mississippi State have had a great rush defense. The Bulldogs limit opponent rush yards to under 90 yards per game. Mississippi State relies on downhill linebacker play and disciplined execution from their defensive tackles. Linebackers Nathaniel Watson and Jett Johnson lead the team in tackles, each having more than 50. Although the Razorbacks have Burks, the Bulldogs have corner Martin Emerson. He can be trusted in man-to-man coverage against Burks. Overall, Mississippi state head coach, Mike Leach, wants his defense to keep Arkansas off balanced.

Leach acknowledged that this forced the Bulldogs to run the ball more, which in turn softened the coverage a bit. In MSU’s last game against Kentucky, than ran 35 times — its highest total since Leach arrived and just the 2nd time they’ve reached 30. This is all possible because MSU quarterback Will Rogers II. He has great efficiency completing 36 of 39 passes.

Mississippi State QB Will Rogers has been named SEC Player of the Week after a standout performance in which he recorded a 92% completion percentage in a 31-17 win over Kentucky.

Both teams will come in with a 5-3 overall mark and a win here could help procure a better bowl destination. This game will rest on whether the Bulldogs can slow down the Razorbacks’ rushing attack.

The Mississippi State Bulldogs head to Arkansas Nov. 6. Kickoff is at 4 p.m. ET.

Previous Bills Vs Jaguars Preview
Next P.K. YONGE CAPS OFF THE REGULAR SEASON WITH A FRIDAY NIGHT WIN