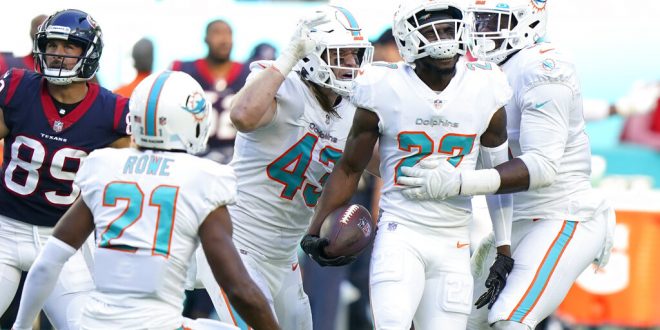 With ticket prices reaching the single digits on the secondary market Sunday morning, fans at Hard Rock Stadium got what they paid for.

In an ugly contest filled with poor offensive play, the Miami Dolphins ended their seven-game losing streak against the lowly Houston Texans.

Quarterback play was largely underwhelming on both sides. Jacoby Brissett made a surprise start for the Dolphins after Tua Tagovailoa was ruled out due to a fractured middle finger on his throwing hand. Tagovailoa had been limited in practice all week, but head coach Brian Flores previously sounded confident that he would play.

In his fourth start of the season, Brissett delivered 26 of 43 passes for 244 yards and one touchdown. He also threw two interceptions.

Tyrod Taylor had possibly the worst game of his pro football career for Houston. After missing the last six games due to a hamstring injury, Taylor looked rusty right out the gate. He threw for 240 yards and no touchdowns, along with three interceptions. Only once in his career previously did Taylor throw more than a single interception in a game.

With both teams combining for nine turnovers, this was the NFL’s most turnover-filled game in over five seasons.

The first score of the game occurred at the 4:37 mark of the first quarter with a Myles Gaskin direct snap wildcat formation six-yard touchdown.

Most of the game’s scoring plays took place in the second quarter. Texans kicker Ka’imi Fairbairn hit two consecutive field goals from 31 and 40 yards respectively. Jason Sanders soon returned the favor with a 42 yard field goal with 1:12 remaining in the first half.

On the very next drive, Taylor threw a careless interception to Jerome Baker as he was running out of bounds. Baker made a dazzling play holding onto the ball while keeping both feet in bounds, as if he were a wide receiver.

Given the short field advantage, the Dolphins capitalized with a Mack Hollins sliding five-yard touchdown reception to close the half.

Leading 17-6 at intermission, this was the Dolphins’ first home halftime lead since Nov. 15, 2020 against the Los Angeles Chargers.

The second half was rather uneventful. Both Miami and Houston couldn’t get anything going offensively, with the only score being a Fairbairn 20-yard field goal midway through the 4th quarter. Although not scoring, Jaylen Waddle had a solid afternoon catching eight out of 10 passes for 83 yards.

The final score was 17-9 in the Dolphins’ favor.

After a painful seven-game losing streak, the Dolphins are now back in the win column. At 2-7, they’ll look to initiate their first winning streak of the season on Thursday night with a difficult matchup at home against Lamar Jackson and the 6-2 Baltimore Ravens.

The Texans are off next week, but things don’t get easier when they resume play Week 11 on the road against the Tennessee Titans.