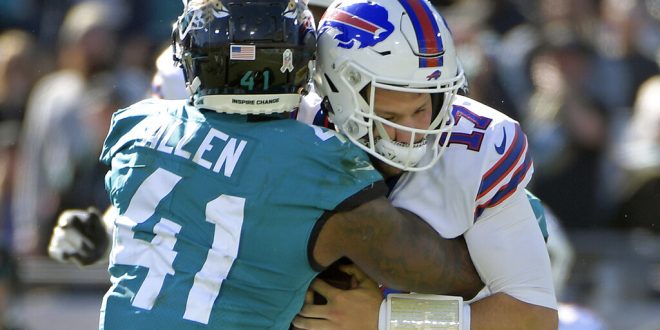 But behind the 2019 seventh overall draft pick, Josh Allen, the Jaguars defense played phenomenally as they kept the other Josh Allen and the rest of the Bills offense out of the endzone all day.

This was the first time a player sacked another player with the same name since the NFL began counting sacks in 1982.

Heading into Week 9, the Buffalo Bills sat in the upper-echelon of the top NFL offenses. But that could not be seen during Sunday’s performance. While quarterback Josh Allen completed 31 of his 47 pass attempts, totaling 264 yards. His two interceptions  created a nightmare scenario for the Bills. Buffalo’s run game did give much help to the Bills offensive production totaling 72 total rushing yards and adding two fumbles to its woes.

QB Josh Allen: We played like sh*t and it starts with me. This loss stings, but we will be better because of it. #BUFvsJAX pic.twitter.com/7RHVjnuOdl

The Bills had not scored less than 23 points all season headed into Jacksonville. With its lowest-scored game of the season now behind the Buffalo Bills, the team now turns its attention to AFC East divisional rival New York Jets. And the Jaguars look to build on its sneaky win with a AFC South divisional rivalry game next week against the Indianapolis Colts.

On Tuesday night, Lomas Brown will be inducted into the College Football Hall of Fame …