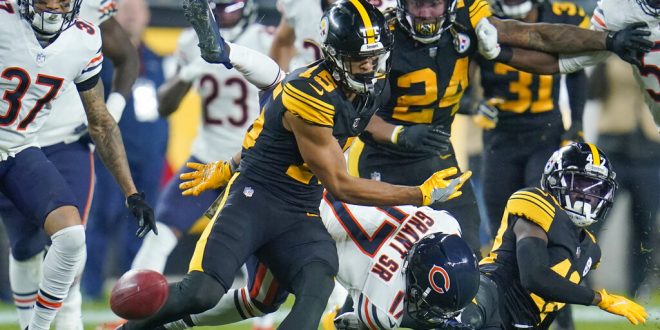 MNF: Steelers Pull Off a Close and Controversial Win Over the Bears

The Pittsburgh Steelers faced tough competition from the Chicago Bears in their 29-27 win Monday night. The Steelers’ victory pushes their record to 5-3, good for second in the AFC North. The Bears are now 3-6 and sit in third in the NFC North.

It took the Steelers remarkable performances to pull off their close victory over the Bears. Outside linebacker T.J. Watt had three sacks against rookie quarterback Justin Fields. This expanded his career sacks total to 61, the fifth most in Steelers history. He also became the fourth fastest player ever to reach 60 career sacks. Coach Tomlin addressed Watt’s standout performance in a brief three words:

With his three sacks against the Bears, @_TJWatt now has 61.0 career sacks, which ranks fifth in #SteelersHistory. pic.twitter.com/9k85FWjzYr

Additionally, running back Najee Harris had the opening touchdown of the game, his fifth straight game scoring for the Steelers. But an extremely valuable performance came from kicker Chris Boswell. He had three field goals in the fourth, two traveling over 50 yards. His 54 yard field goal was the second furthest ever in Heinz Field. Boswell also nailed a 40 yard field goal with 26 seconds of play left, confirming the two-point win for Pittsburgh. Head Coach Mike Tomlin then reached 150 career victories.

After the game, Tomlin acknowledged how hard of a battle the Bears put up, saying “they competed for 60 minutes.” He then went on to praise the way his team played and the points they found in the closing minutes.

Bears Fight to the Finish

The Bears had an unexpected surge in the game to create a tough battle for the Steelers. In the first three quarters, the only points Chicago managed were two field goals from kicker Cairo Santos.  Then, Darnell Mooney had a 15 yard touchdown run to set the tone for the fourth quarter. Safety DeAndre Houston-Carson followed with a phenomenal fumble return for a 25 yard touchdown, closing the Steelers’ lead to three with just over six minutes left. Justin Fields showed significant potential, completing 17-29 passes for 291 yards in only his seventh career start. Coach Tomlin has seen the talent that Fields possesses and prepared the Steelers to face him.

In the final two minutes, Fields threw a 16 yard pass to Mooney for a touchdown and one-point advantage over Pittsburgh. However, their attempt at victory ultimately fell just two points short.

The face off between the Bears and Steelers was far from perfect. The game was filled with controversial calls that makes many question the legitimacy of the final score. The Bears were hit with a whopping 12 penalties for 115 yards. Pittsburgh faced five penalties for 30 yards. A standout call was at three and a half minutes left in the third quarter. Fields threw a touchdown pass to tight end Jimmy Graham, but a questionable offensive penalty on James Daniels reversed the play. That call was a vital component of the Bears’ loss.

Additionally, Cassius Marsh was hit with a taunting penalty after sacking Roethlisberger. Marsh’s celebration was deemed inappropriate by referee Tony Corrente. “I saw the player, after he made a big play, run toward the bench area of the Pittsburgh Steelers and posture in such a way that I felt he was taunting them,” said Corrente. The call ultimately led to a first down and field goal for the Steelers. Marsh spent training camp with the Steelers, and Roethlisberger had no hard feelings about his celebration.

The Bears had an unlucky performance that caused them to fall short to the Steelers. However, they’ll have a week off to recuperate and they will face the Baltimore Ravens at home on November 21st. The Steelers will host Detroit on Sunday and are hoping to see their sixth straight win against the Lions.