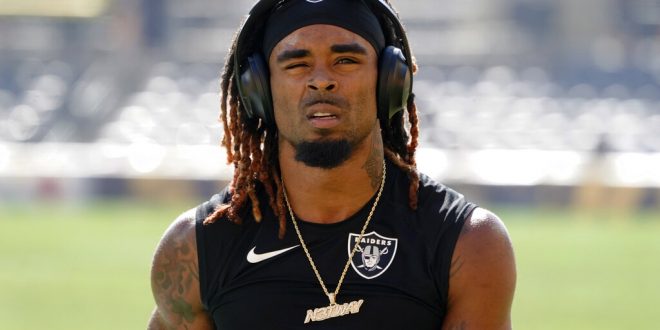 FILE - Las Vegas Raiders cornerback Damon Arnette warms up before an NFL football game against the Pittsburgh Steelers, Sunday, Sept. 19, 2020, in Pittsburgh. The Las Vegas Raiders waived 2020 first-round pick Damon Arnette and have now cut ties with both first-round picks from that draft before the midpoint of their second season. General manager Mike Mayock called it a “painful decision” to release Arnette on Monday, Nov. 8, 2021, but said it was necessary in response to a social media post with Arnette brandishing a gun and threatening to kill someone. (AP Photo/Keith Srakocic, File)

Needless to say, the Las Vegas Raiders’ season off the field has gone far worse than any team would hope. The Raiders have already lost their head coach and star wide receiver. Now, the defense takes a hit with the release of Damon Arnette.

The issues began in October with the loss of head coach John Gruden. After leaked emails uncovering years of racist and homophobic remarks, Gruden stepped down as the Raiders’ head coach. He held the position since 2018. Special teams coordinator Rich Bisaccia has served as the team’s interim head coach since Gruden’s resignation.

The issues became tragic just last week. Henry Ruggs III, the Raiders’ first-round pick in the 2020 draft, was arrested after getting into a car accident resulting in the death of a woman and her dog. Ruggs is facing multiple charges, including being intoxicated to more than twice the legal limit and driving 156 mph. The Raiders released Ruggs less than 24 hours after the crash.

On Monday, the Raiders released star cornerback Damon Arnette after a video leaked on social media that allegedly shows Arnette threatening to kill someone with a gun. The Raiders drafted Arnette in the first round alongside Ruggs.

The Raiders have waived CB Damon Arnette, a first-round draft pick in 2020, after he was seen on video making death threats while wielding firearms. https://t.co/cq9w05EKha

Raiders’ general manager Mike Maycock described the video as “unacceptable,” and the organization would not tolerate it. Maycock said the decision was a painful one. The team devoted significant time and resources in an effort to help Arnette in all facets of his life.

Maycock also stated there were “significant concerns” around Arnette before drafting him. Despite the concerns, the Raiders’ staff felt they were capable of getting Arnette’s life in order and was worth the risk.

The 2020 draft class for the Raiders has fallen under a lot of scrutiny. Having already lost both first-round picks, the Raiders’ class is a shell of what it was. Of the seven picks, the Raiders had in the draft, only three players remain. Ruggs and Arnette are gone. The Raiders traded third-rounder Lynn Bowden before he took a single snap. Tanner Muse missed his entire rookie season to injury. The Raiders released him in September.

Despite the 5-3 record, more has seemed too wrong for the Raiders in the last month than has gone right.

Jack Shivertaker is a senior at the University of Florida pursuing a degree in Journalism with a focus on sports media.
@JackShivertaker
Previous MNF: Steelers Pull Off a Close and Controversial Win Over the Bears
Next UF Women’s Basketball Season Opener Set against Georgia State

Week 12 of the NFL season began on Thanksgiving with three games that were played. …