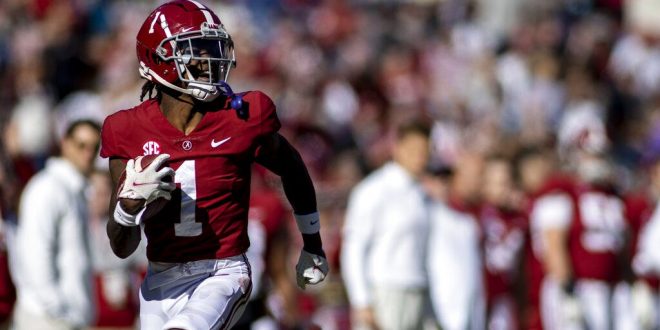 Alabama wide receiver Jameson Williams (1) runs down the sideline on a long pass reception against New Mexico State during the first half of an NCAA college football game, Saturday, Nov. 13, 2021, in Tuscaloosa, Ala. (AP Photo/Vasha Hunt)

No. 21 Arkansas vs No. 2 Alabama Preview

With only two weeks remaining, the SEC West is still up for grabs. Mathematically speaking, it is still possible for four different teams to take the division crown and face Georgia in the SEC Championship. Two of those teams are second-ranked Alabama and 20th ranked Arkansas, who square off tomorrow. 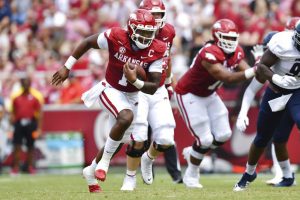 In year two of Sam Pittman’s tenure, the Razorbacks have witnessed an astonishing turnaround from where the program was just two season ago. After back-to-back two-win seasons, Arkansas is back in the top 25 and going to a bowl game. Their season has seen huge wins over rivals Texas, Texas A&M, and LSU.

While their chances are very slim, nobody would have expected Arkansas to be a team still in contention for the West this late in the season. A loss for Arkansas means they are out of the division race. Even with a win, their chances are still slim. Still, Arkansas is probably going to a good bowl game and the possibility of a nine-win season is a good one.

For Alabama, this season has been a fairly typical one. Big wins in big games, an upset loss on the road, and still with a national championship on their mind. The Crimson Tide started the year ranked number one, and stormed out to wins over Miami, Florida and Ole Miss. A road loss to Texas A&M was a setback, but Alabama has rebounded since and defeated Mississippi State, Tennessee and LSU.

A win over Arkansas clinches the SEC West for the Tide and earns them a date with Georgia in Atlanta. Per usual, Alabama is looking playoffs or bust. A lot still stands in their way however. Even after Arkansas, Alabama still has to play Auburn on the road, where the Tide have not won since 2015, and the aforementioned game against Georgia, should they make it.

Tomorrow’s game will mark the 30th meeting all-time between the two schools. As Arkansas did not join the SEC until the 1992 expansion, the two sides had not faced regularly until then. Alabama won the only two prior meetings in 1962 and 1980, yet Arkansas had the edge when joining the SEC and won eight games in 14 years.

But ever since Nick Saban went to Tuscaloosa, it has been all Alabama. Saban arrived in 2007, and since then he has never lost to Arkansas. Not only has Saban beaten Arkansas, he has dominated them. The average score of Alabama vs Arkansas since Saban arrived is about 42-14 in favor of Alabama.

Both teams feature quality offenses that rank towards the top of the SEC and the nation. Arkansas ranks fifth in the SEC and 34th in the country in total offense, averaging 439.8 yards per game. Most of the work has been done by the run game. The Razorbacks feature four players who have each rushed for over 450 yards this season. Trelon Smith leads the team with 513 rush yards. Raheim Sanders and Dominique Johnson have also rushed for 460 and 456 yards respectively. Quarterback KJ Jefferson also contributes to the rushing attack with 474 yards on the year. All together, Arkansas has scored 16 touchdowns on the ground with just these four players. Of the Razorbacks’ 36 touchdowns in 2021, 19 have come on the ground.

Alabama moves the ball in the opposite method. They move the ball through the air. The Alabama passing game is second best in the SEC and 11th nationally with 322.6 passing yards per game. In contributes mightily to Alabama have the number one scoring offense in the SEC and third best in the country with 44.6 points per game. Quarterback Bryce Young has thrown for over 3,000 yards, a TD/INT ratio of 33/3, and is one of the favorites to win the Heisman Trophy. The receiving corps has been led by Jameson Williams with 1,028 yards and 10 touchdowns on the season. John Metchie III is also a big contributor with 722 yards and six touchdowns.

In terms of defense, both teams are solid, but Alabama has the advantage. Arkansas’ defense ranks sixth in the SEC. They allow 346.9 yards and 22.9 points per game. Overall good numbers, but overshadowed by Alabama. The Crimson Tide only allow 290.3 yards and 18.3 points per game, second only to Georgia in the SEC.

Arkansas is up against tough opposition. Naturally, as it is Alabama after all. Alabama clinches the SEC West with a win here and they would much rather clinch it here than have to do it on the road against Auburn. As for Arkansas, a win ends their doubt against Alabama and also potentially throws them into contention for a New Year’s Six bowl.

Alabama is currently listed as a 20.5 point favorite. The game is being played at Bryant-Denny Stadium in Tuscaloosa, AL with a 3:30 kickoff.

Jack Shivertaker is a senior at the University of Florida pursuing a degree in Journalism with a focus on sports media.
@JackShivertaker
Previous Florida Volleyball Looks to Extend Win Streak With Weekend Series Against South Carolina
Next CFB: Auburn at South Carolina Preview