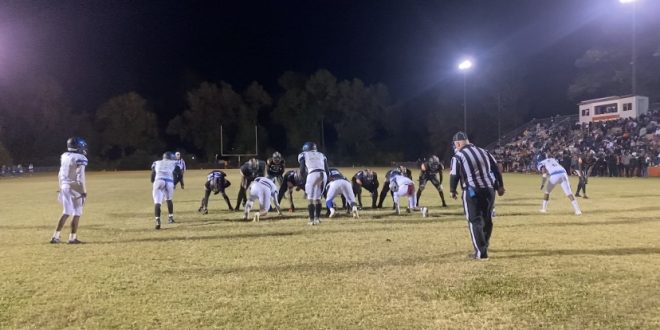 1st and goal, Hawthorne, as they take on Wildwood in the FL Class 1A Regional Semifinals

The Hawthorne Hornets rolled through the Wildwood Wildcats 50-14 in the FL Class 1A Regional Semifinals Friday night.

The Wildcats came into Hawthorne’s home field riding high, after a Round 1 home victory over Fort Meade. The Hornets, on the other hand, hadn’t played in nearly a month due to game cancellations and a Round 1 bye. Their last game, to be precise: 10/22 versus Forest—a home game in which they won 27-6.

So, in hindsight, Wildwood’s hot start in this one shouldn’t have been too surprising.

After a few early defensive stops by both teams, the Wildcats got themselves into Hawthorne’s end-zone with just over four minutes remaining in the first—courtesy of a huge rush from freshman quarterback Jonathan Hardy. Hawthorne blocked the extra-point attempt.

The 6-0 Wildwood lead would stick to the end of the first quarter.

After a quarter in Hawthorne, the Wildcats looked absolutely great. Hardy was making great, quick decisions. Throws were on target. The offense was flowing. The defense, well, was giving up absolutely nothing. Tyler Jefferson, Hawthorne’s junior quarterback and the number 2 ranked back for his class in the state of Florida, simply could not move the ball. The pass rush was there. Wide-outs couldn’t get open. Hawthorne running-back Brian James, who may just be the Hornets’ best weapon alongside Jefferson, couldn’t find a seam.

And, as the great saying goes, Wildwood enjoyed it while it lasted.

Mackey and Brian James led the Hornets’ offense on what was by far their best drive of the game. Moving the ball well, with five minutes remaining in the half, Hawthorne would finally find the pylon thanks to a goal-line rush from James.  Coach Ingram then re-deployed Tyler Jefferson for the two-point conversion attempt, in which he would successfully run it in.

Hawthorne now leads by two. The game was still anybody’s.

Back-to-Back Fumbles in the 2nd

With less than a minute on the clock, after a big stop, the Hornets found themselves right back in the red zone with a huge opportunity to go up two possessions before the half.

But, a high snap lead to a fumble, which gave Wildwood the ball seemingly for the last possession before the clock would wind down.

However, in what may have been the game-changing play, Wildwood fumbled themselves and gave Hawthorne the ball right back in the red zone. And, this time, the Hornets would not come away without putting points on the board. Senior receiver Camren Cohens was able to bring in the most crucial touchdown of the game. Tyler Jefferson followed it up with his second two-point conversion, rushing it in again.

The halftime score stood at 16-6, Hawthorne.

It’s safe to say that the rust wore right off at halftime. Because coming out of the half, this team looked championship-made, quite the difference from what the Hornets displayed through the first 24 minutes.

Right out of the gate, Tyler Jefferson rushed for a massive 40-yard touchdown followed by a failed two-point conversion. This would push the Hornets’ lead to 16.

Unfortunately for Wildwood, they can’t say they had the same success in their first possession of the half. A three-and-out would give Hawthorne back the ball, up 16 with a chance to put the Wildcats in a really bad spot.

And that they would.

A Mackey handoff to James, in his second score Friday, did the trick for the Hornets.

Already, just three-and-a-half minutes into the second half, Hawthorne was into the end-zone twice. At this point, it was 28 unanswered points after going down 6-0 early. They were, by all meanings of the word, rolling.

“We were pretty soft up front to start off. We made some bad reads. We made adjustments during halftime … Our team wanted it.”

Coach Ingram when asked about halftime adjustments and the tale of two halves that this game truly was.

The bleeding for Wildwood would only continue from here. A pair of rushing touchdowns, one from Jefferson and another from James, would compile a total score of 40-6 at the end of the third. A game that you can only imagine the Wildcats felt great about not long ago, was suddenly over with an entire quarter left to play.

That’s the type of team the Hawthorne Hornets are. You make one mistake; you drop one pass; you fumble one ball; you will pay. Tonight, that song was sung to the tune of forty unanswered points.

As Things Wind Down

Outside of Wildwood’s only other score of the game, bringing them up to 14 points with a two-point conversion, the fourth quarter essentially consisted of Hawthorne practice reps, valuable practice reps.

Senior running-back Brian Hart got in the end-zone for the Hornets, putting them up to 47 on the evening.

Freshman kicker Sam Carroll, who is clearly a team favorite, added a field goal before time expired to get Hawthorne to the 50-point mark. The team was happy for him and it is clear from reactions like that, Coach Ingram has built a family with this Hawthorne football program.

Worthy of note is that the fans also got a good look at Hawthorne’s freshman quarterback, Coach Ingram’s son, Cornelius Ingram Jr. in the last quarter. “That’s the future. He’s the future.” Whispers could be heard making their way through the Hawthorne loyal.

Getting a look at Fr. QB Cornelius Ingram Jr. for Hawthorne here in the 4th Q. Regardless of the scoreboard, these are valuable reps for a young quarterback in a playoff atmosphere. @FlaHSFootball @ESPNGainesville @ThePrepZone @GNVpreps @HMHSHornets

The night could not be properly assessed without mentioning the defensive unit for Hawthorne. The front seven, the MLBs, the secondary, everything was on par with what it’s been all season—exceptional—which has to be a fantastic sign for the Hornets’ staff in the team’s first postseason game after a month off.

The star of tonight’s show, though, was junior tackle Stanley Cooks.

Standing at what’s listed as 6’2, he was able to by all means have his way with the Wildcats offensive line all night long. When you have a piece like Cooks pressuring the quarterback, it makes everyone else’s jobs a bit easier and the defense as a group look a whole lot better.

“High-energy guy with an incredible motor … Basically the spokesperson of the team.”

Coach Ingram had some high praise for the DT and the Hornets defensive group.

What’s Ahead for Hawthorne

With the victory, the Hornets move on to the regional finals and are now just two wins away from reaching the state championship game in back-to-back seasons.

Last year, Hawthorne came up just short. And, one would think that has got to have been some sort of motivating factor for the Hornets throughout the season and as they progress through the playoffs. Coach Ingram confirmed that yes, indeed it is—every single day since the loss.

As far as the Hornet’s regional finals matchup? Well, on this same night, Pahokee took down Bradford 38-20 in their regional semifinal game. This puts them up against Hawthorne.

Here is Coach Ingram’s live reaction post-game to finding out that Pahokee will be who his Hornets take on in the regional finals:

“We’re looking forward to next week.”

The regional finals game is scheduled for the Friday after Thanksgiving (11/26) at 7:30 p.m. in Hawthorne.

Zackary is currently studying Sports Journalism at the University of Florida. He has years of experience providing online content for various news outlets in every form, as well as experience running multiple sports-related social media accounts with high followings. He does work for WRUF / ESPN Gainesville by producing the radio broadcasts in addition to writing online content. Zackary's planned graduation is May 2024. Please feel free to contact via email at zackweiss48@icloud.com. Links to Zackary's social medias are directly below:
@zackweissespng
Previous Gators Women’s Basketball Defeats Grambling State
Next Pat Dooley’s Grades: Florida vs Mizzou