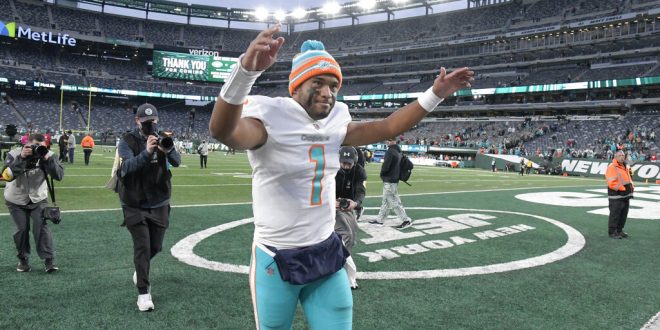 Wide receiver Jaylen Waddle ran for a touchdown six minutes into the first quarter and put up 65 receiving yards throughout the game. The rookie has 622 career yards in his 11 games played in a Dolphins uniform.

Jets safety Ashtyn Davis turned over possession with a 30-yard interception ten minutes in the first quarter, making for his first pick in his career. New York soon used that to their advantage. With the clock winding down and the Jets standing fourth and goal, quarterback Joe Flacco made the perfect pass to wide receiver Jamison Crowder, who put up 44 yards in the game.

With the game tied at seven, the Dolphins grew hungry. Three minutes into the second quarter, Flacco fumbled the ball second and goal, and defensive tackle Christian Wilkins took no hesitation in obtaining possession. Though the ball slipped out of Wilkins hands, it was soon recovered by Miami safety Jevon Holland. Both teams failed to score in the second quarter.

Flacco opened the third quarter with a long pass to wide receiver Elijah Moore, who put up 144 yards. He now totals 415 yards in his first year in the NFL.

Jets kicker Matt Ammendola missed his second field goal of the game with five minutes left in the third, but the Jets soon picked themselves up with Moore’s 20-yard catch and run to the end zone two minutes later. The game was tied once again.

The Dolphins broke the long-lived tie in the fourth quarter to ultimately take back the game. They took over the fourth quarter with a touchdown by running back Myles Gaskin five minutes in to make it 20-14. Gaskin led the team with 89 rushing yards.

“We had some mishaps, but it didn’t matter,” Tagovailoa said. “We just kept going.”

With 18 seconds left in the fourth, the Jets surrendered with a field goal and left the game with only 17 points.

The Dolphins travel back to Miami to take on the Carolina Panthers for Sunday night football, and the Jets play the Houston Texans.