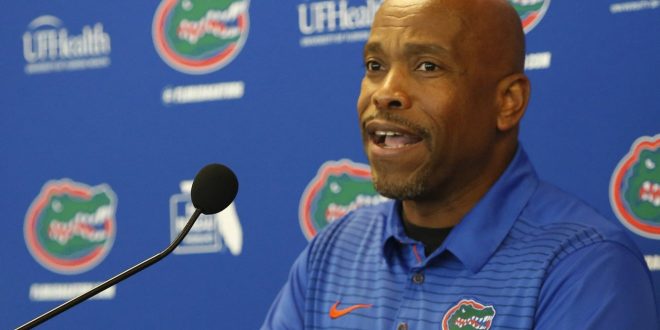 With Dan Mullen out, Greg Knox is in charge of the Florida Gators. The interim head coach stepped up to the microphone on Monday to answer questions about FSU and plans moving forward.

The Gators take on the Florida State Seminoles on Saturday at noon. However, this annual matchup will be without Dan Mullen.

And his attention is all on the historic rivalry.

“We’re playing at home,” Knox said, “And we win at home. That’s the message.”

He said the goal is to get the seniors a rivalry win and send them off the right way.

But, this isn’t the first time Knox has been in this role.

Knox said quarterbacks coach Garrick McGee will call plays for the offense, and linebackers coach Christian Robinson will continue calling plays for the defense. Offensive assistant Dean Kennedy has also been promoted to an on-the-field role.

When asked about lineup adjustments, Knox said there would be no changes.

Knox said if quarterback Anthony Richardson is healthy, the team will find a way to get him in the game.

As with any major coaching change, recruitment is going to take a major hit. Within 24 hours of the announcement that Mullen had been fired, many commits announced they would be opening their recruitment.

Jammarien Burt and Isaiah Bond announced they would be de-committing.

Due to difficulties and Florida is coaching staff I will be the Opening back up my recruitment. #decomitted #backonthemarket

Knox said the staff has been in contact with the recruits.

He said next week marks the start of the “contact period,” and the staff will be in the homes of recruits giving their pitch.

Despite averaging six yards per rush and scoring 11 touchdowns on the ground this year, Dameon Pierce has yet to run the ball 10 times in a game this year.

Knox said it’s because of the talented running back room. A room that has Malik Davis, Dameon Pierce, Lorenzo Lingard, Nay’Quan Wright and Demarkcus Bowman.

“The one thing I like about them the most is they’re very unselfish,” Knox said, “And they complement each other. They could care less who’s playing, how many carries each other gets. They’re excited when each other has success.”

The Gators will look to become bowl eligible on Saturday while massive changes loom in the future.

Oddsmakers already have Bob Stoops as the favorite for the next Florida head football coach.

Favorites to be next full-time Florida football coach

Chris Will is a second-year journalism student with a focus on sports and media. Originally from the Fort Lauderdale area, Will now covers all things sports in Gainesville.
@_Chris_Will_
Previous The Buccaneers host the Giants on Monday Night Football
Next Around College Football Heading into the Final Week