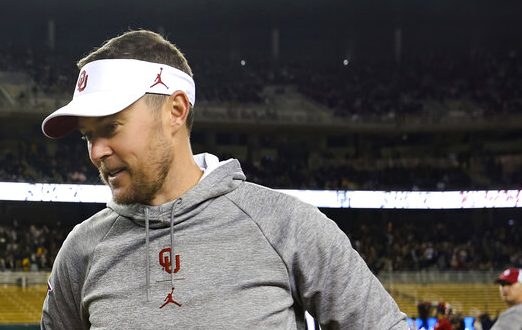 FILE - In this Nov. 16, 2019, file photo, Baylor head coach Matt Rhule, left, and Oklahoma head coach Lincoln Riley talk at midfield prior to an NCAA college football game in Waco, Texas. Rhule and Riley took over their teams under drastically different circumstances. Now they will coach against each other in the Big 12 championship game. (AP Photo/Ray Carlin, File)

Lincoln Riley ended his night on Saturday by telling reporters that he would not be the head coach at LSU.

Riley was technically correct in the assessment of his future. Rumors had been swirling that he was heading to the Bayou, and the Oklahoma Sooners head coach shot them down.

However, it turns out that reporters were asking the wrong question. That is because early Sunday afternoon, reports began surfacing that Riley was heading to Los Angeles to coach USC.

Expect an announcement on this in the 24 hours, per sources. The final details are being worked out. https://t.co/OqtP63a9Ml

He was right about not going to LSU, but he never said he was not leaving Norman. By Monday morning, he was already in Southern California.

Here is a look at what the move means for both programs.

USC Looks For A Revival

The once-dominant Trojans are a long way removed from their glory days under Pete Carroll. Since Carroll left in 2009, the Trojans have won ten or more games just four times and have won the Pac-12 just once.

Lincoln Riley will be their fourth different head coach and he is looking to bring some stability to a program that has lacked it for over a decade. His work will begin on the recruiting trail, a place where Riley excelled and Oklahoma and USC have lagged behind recently.

We got our guy.

Currently, the Trojans recruiting class is ranked 67th in the country, per 247Sports, and they have just eight commitments. The three teams directly in front of them are Tulane, East Carolina and Memphis.  The recruiting under Clay Helton had been extremely inconsistent. The Trojans ranked in the Top 10 four times, but also ranked 20th or below three times, including their current 64th ranking. Their 2020 class ranked 67th in the country, and their 2019 class was 20th.

Meanwhile, Riley has done a great job on the trail at Oklahoma. Four of his five classes in Norman finished in the Top 10 and all of them were either first or second-best in the Big 12.

The Trojans will be hoping that Riley can bring his elite recruiting ability to the west coast. California has always been a hotbed for talent, so having a strong recruiter leading the program is vital to their success.

USC is widely considered one of the best jobs in the country, so Riley will have all the resources needed to have success there. They are a giant of a program that has been asleep for a while, in need of a CEO-type head coach to wake them up.

As Lincoln Riley heads to Southern California, he leaves behind a frenzy in Norman as fans of Oklahoma have lashed out against Riley in response to his move.

How are things going in Norman?

“Traitor” banners posted on OU’s seed sower statue and at the front of the stadium hours after Lincoln Riley leaves #Sooners for USC job.

Joining him on the plane to USC were his defensive coordinator, wide receivers coach, director of operations and strength coach. Oklahoma has also seen a flurry of de-commitments in the wake of the news and their recruiting class has slipped to 11th in the country. One of the de-decommits is five-star QB Malachi Nelson, the second overall player in the 2023 class.

Meanwhile, current QB Spencer Rattler, once the top-ranked quarterback in this year’s draft class, announced Monday that he will enter the transfer portal.

As for the rest of the season, former Oklahoma coach Bob Stoops will be the interim head coach. He will lead the Sooners in their bowl game, which should be a New Year’s Six game.

Who Is Next In Line?

With a head coaching carousel already loaded with big jobs, Oklahoma now joins the parade. One popular candidate is Tennessee head coach Josh Heupel, who won a National Championship as a starting quarterback in Norman. He also worked as both a QB coach and co-offensive coordinator at OU from 2006-2014.

Heupel spent three years as the head coach at UCF before he moved to Tennessee this year. He went 7-5 in his first year in Knoxville after accumulating 28 wins in three years at Central Florida.

One problem with Heupel is his recruiting ability. His current class ranks 23rd in the country and he never had great success in that department at UCF. Oklahoma has more pedigree than both those programs, but they may look for an option with stronger recruiting ability.

Never say never, but is there something about Heupel and Oklahoma other than that he played and coached there? UCF fans weren't real sad to see him go, and Tennessee has just two four-star recruits committed right now. Strong first W-L season though.

Oklahoma is SEC bound within the next couple of years, so it will be an attractive job for any head coaching candidate. They also have a long history of success and a strong recruiting base being near Texas.

ESPN’s Adam Schefter reported that current Arizona Cardinals coach Kliff Kingsbury is on the Sooners’ radar. He previously coached in the Big 12 at Texas Tech before moving to the NFL.

Another option is Kentucky Head coach Mark Stoops. He is the brother of legendary Oklahoma head coach, Bob Stoops, who won a National Championship and 10 Big 12 Championships in 17 years in Norman.

The Mark Stoops-Oklahoma chatter is only going to get louder, but Kentucky can put an end to it rather quickly–and simply.

Pay the most successful Wildcat head coach of the last 50 years what he's earned. https://t.co/oHvK2qwWZz

A popular name for all the big jobs is Ole Miss coach Lane Kiffin. Whether Oklahoma is an attractive enough job for Kiffin to leave Oxford is uncertain. It is certainly a bigger program, but it may not be one that interests Kiffin.

Lincoln Riley leaving creates yet another very attractive opening in one of the craziest coaching carousels we have seen in a long time.

Ethan Budowsky is a fifth-year telecommunications student at the University of Florida. He covers Major League Baseball for Just Baseball Media and previously covered the Miami Marlins for their SB Nation affiliate, Fish Stripes.
@ethanbudowsky
Previous Florida Moves Up Nine Spots to No. 14 in AP Poll
Next Week 12: Around the NFL