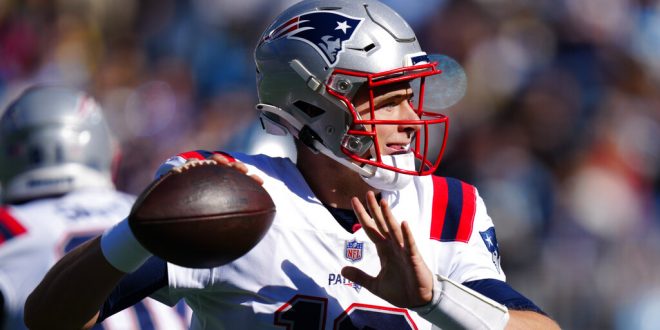 Week 12 of the NFL season began on Thanksgiving with three games that were played. The Bears beat the Lions 16-14, and the Lions are still winless on the season. The Raiders beat the Cowboys in a shootout 36-33, and the Bills cruised over the Saints, winning 31-6. With their victory, the Raiders are now 6-5 on the season and are tied with the Chargers and the Broncos for second in the AFC West. Meanwhile, the Bills are 7-4 after their win and currently sit in second place behind the Patriots in the AFC East.

The Titans traveled to take on the New England Patriots in a game with playoff implications. In a game that was expected to be a tight battle, it was the Patriots who dominated the game, winning 36-13. Rookie quarterback Mac Jones threw for 310 yards and two touchdowns on 23 completions. Veteran wide receiver, Kendrick Bourne, caught five passes for 61 yards and two touchdowns. Meanwhile, the Titans had no problem running the ball, but they did struggle to pass it.  Dontrell Hilliard and D’Onta Foreman combined for 240 yards and one touchdown. However, Ryan Tannehill completed 52 percent of his passes for only 93 yards with one touchdown and one interception.

In the AFC North, the Bengals exploded for 41 points as they beat the Steelers 41-10. Joe Mixon ran the ball 28 times for 165 yards and two touchdowns. Tee Higgins also had a big game in this dominant victory. Higgins caught six passes for 114 yards and one touchdown. Meanwhile on the defensive side of the ball, Eli Apple and Mike Hilton each intercepted Ben Roethlisberger once in this convincing victory.

In NFC action, the Rams took on Aaron Rodgers and the Packers in Green Bay. This was a shootout of two of the premier teams in the NFC that did not disappoint. Matthew Stafford went toe-to-toe with Rodgers, but ultimately fell short losing 36-28. Stafford completed 21/38 passes for 302 yards, three touchdowns, and one interception. However, Rodgers completed 28/45 passes for 307 yards and two touchdowns. He also ran for a touchdown as he helped the Packers improve to 9-3 on the year, while the Rams drop to 7-4 on the year.

The Browns traveled to face the Ravens on Sunday Night Football. The Ravens won in a low-scoring defensive battle, 16-10. This victory gave them sole possession of first place in the AFC North as they improve to 8-3. Lamar Jackson struggled in the game throwing four interceptions, but the Browns failed to capitalize on these turnovers as they only scored three points off of these interceptions. The Ravens look to further their lead in the division next week as they will take on the Steelers.