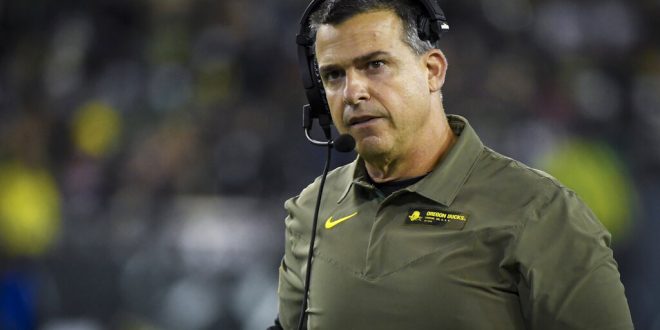 FILE -O regon head coach Mario Cristobal watches the action during the third quarter of an NCAA college football game Saturday, Nov. 13, 2021, in Eugene, Ore. Manny Diaz was fired as Miami’s football coach Monday, Dec. 6, 2021, after a 7-5 regular season and with the school in deep negotiations to bring Oregon coach Mario Cristobal back to his alma mater to take over. (AP Photo/Andy Nelson, File)

The University of Miami has announced the hiring of Oregon head coach Mario Cristobal as they held a press conference today to introduce the new coach.

Not sure about y’all, but we’re fired up. pic.twitter.com/XaCgLa96VY

The press conference comes one day after firing Manny Diaz and the announcement of the new head coach. Previously, Diaz served as the Hurricanes defensive coordinator under former coach Mark Richt.

Cristobal is the Hurricanes’ seventh head coach hire since 1995 when Butch Davis was hired. In the 2021 season, the Hurricanes had a record of 7-5, suffering close losses to Virginia, UNC and Florida State.

Within the press conference, the Miami Native expressed his excitement and anticipation to get the program dominating college football.

Cristobal, in this ongoing press conference: "I’m going to invest every ounce of my existence to make sure we get to level we need to get to.”

On College Gameday, while discussing the UM vs. FSU game, Kirk Herbstreit highlighted the flaws within the University of Miami. He specifically mentioned the lack of unity between athletics and leadership referencing an article written by Miami Herald journalist, Barry Jackson. Herbstreit emphasized the lack of funding and the consequences of playing in a stadium that is off-campus.

Cristobal credits Kirk Herbstreit for getting Miami's administration to spend money on athletics.

According to the reports about Cristobal’s new contract, it seems as if the administrations is willing to invest in the program.

Many reports out there saying Miami and Cristobal agreed to 10-year/$80M deal with largest assistant pool in ACC.

Dawn of a new day in Coral Gables.

Within the program, there has also been concern about the lack of recruiting from the talent that resides in South Florida. The program has faced criticism in recruiting, however, Cristobal hopes to turn around that narrative.

Mario Cristobal on football in South Florida: "Guys play football down here not only because they want to, but because they have to. It's a way of life down here. It's in the DNA."

And on recruiting: "It's time to make sure the talent stays home."

Cristobal as an Oregon Duck

While the team is still in search of an Athletic Director to fill Blake James’ role, Cristobal returns to South Florida with a highly decorated resume. The Miami native is returning to the 305 with a 35-13 record and a strong recruiting network.

UM hopes to rise to the top

The Hurricanes hope to return to the powerhouse that they once were in the 2000s. It is no secret that the University of Miami has the ability to produce talent. According to miamihurricanes.com, the Hurricanes have produced 281 NFL draft picks and 60 NFL first-rounders.

The question that will continue to be asked “Is the U back?” and only time will tell as Mario Cristobal prepares to dominate in the 2022 season.

Mario: “We gotta bring this thing tight.. because when the U is on and the U is tight there’s nothing like it” pic.twitter.com/Tuobs0IPyq