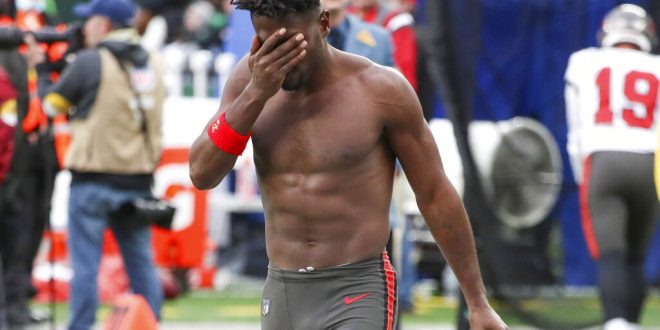 Tampa Bay Buccaneers wide receiver Antonio Brown wipes his face as he leaves the field after throwing his equipment into the stands while his team is on offense during the third quarter of an NFL football game against the New York Jets, Sunday, Jan. 2, 2022, in East Rutherford, N.J. (Andrew Mills/NJ Advance Media via AP)

During the third quarter of a Week 17 matchup between the Tampa Bay Buccaneers and the New York Jets, wide receiver Antonio Brown left the game in overwhelming fashion. Exiting the field by throwing his equipment on the sidelines, seemingly, taking one final jog to the Bucs’ locker room. As he paraded shirtless through the endzone, Brown caused a firestorm to take place within the defending Super Bowl champion’s organization.

Video of Antonio Brown leaving the field after taking off his jersey and shirt and throw it into the stands. pic.twitter.com/1hwNYei5Fq

How Did This Start?

It was initially reported that he was “forced to play on an injured ankle that will require surgery,” according to Brown.

Since Brown’s departure, he has taken to social media to accuse the Bucs’ of poor judgement of his injuries. Brown mainly accused Buccaneers’ head coach Bruce Arians as being the cause of these issues.

In text messages made public by Brown, it shows Arians and Brown discussing the receiver’s rehabbing of his injured ankle. It shows Arians being reluctant to resting the five-time NFL All-Pro. But, still mentioning how the team wants to have Brown as an option.

Arians addressed the media saying Brown never sought medical attention from the team’s staff about his ankle during the game. Arians then stated how Brown was mainly upset about not receiving enough passing targets. Ironically, Brown had ten catches and over a hundred yards on fifteen targets in the Bucs Week 16 matchup. Also, Brown was only eight catches away from achieving one of his contact’s incentives.

How Did Bucs Handle This?

Since 2019, Brown has bounced around to a few different teams. While his departures from his previous teams have been quite erratic, Brown quickly condemned the Buccaneers’ alleged attempt to mark his actions as a “mental health issue,” according to ESPN’s Jenna Laine.

After the Week 17, head coach Bruce Arians said Brown was no longer with the team. However, Antonio Brown was officially released by the Buccaneers on Thursday, Janurary 6, 2022.