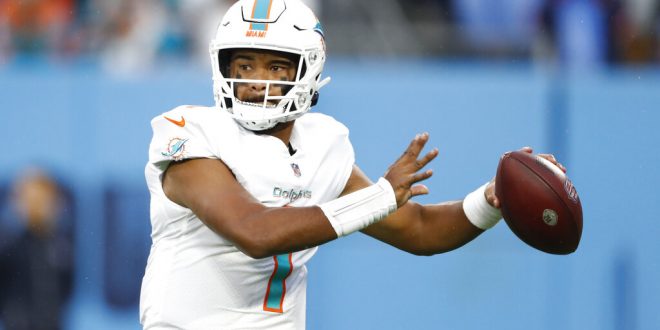 It may seem like a meaningless game, but a lot is at stake as the Miami Dolphins and New England Patriots meet in Week 18 of the regular season.

Although the game won’t determine a playoff spot for either team, the Patriots (10-6) have a chance to clinch the AFC East for the 18th time under head coach Bill Belicheck and, potentially, the No. 1 seed in the AFC. For the Dolphins, a playoff appearance is out of the question, but many will be fighting for their jobs on Sunday. Additionally, it will be the second time former Alabama teammates Tua Tagovailoa and Mac Jones face each other in the NFL.

Mac Jones asked who Alabama fans should root for when he faces Tua Tagovailoa: "I think it's more just the Patriots vs. the Dolphins. Tua's a great quarterback. When we were together, he was a great teammate."

The Dolphins won the first matchup this season with a 17-16 victory in Week One.

After starting the season 1-7 and fans calling for head coach Brian Flores and general manager Chris Grier to be fired, the Dolphins were able to rally off seven-straight wins to put them back in playoff contention. However, any hope for a playoff spot was crushed last Sunday.

The Dolphins lost in embarrassing fashion to the Tennessee Titans 34-3 on Jan. 2, putting them nearly out of reach for a playoff spot. Miami would not be officially out of playoff contention until later that day when the Chargers defeated the Broncos. The Dolphins now extend their playoff drought to five-straight seasons.

Even with playoff hopes long and gone, a lot is at stake for Miami. Mainly, jobs are on the line for many including Flores, Grier and Tagovailoa.

In three years at the helm, Flores has led the Dolphins to a 23-25 record overall, including a 10-6 record in 2020. However, he has yet to make the playoffs as the head coach.

Tagovailoa is fighting for his own starting job after an abysmal performance against the Titans. On the year, he has thrown for 2,544 yards with 15 touchdowns against 10 interceptions. However, he has been inconsistent over the last two years, leading many to question if he can be the team’s franchise quarterback.

WATCH: Tua Tagovailoa asked why people should feel confident he's the QB to eventually lead Miami to the playoffs in the future #Dolphins #finsup pic.twitter.com/Se71yBq3Uz

Grier, who has been with the team in various roles since 2000, and the general manager since 2016, drafted Tagovailoa fifth overall in 2020, whose struggles have often led fans to want to move on from both. Additionally, he drafted Tagovailoa over Justin Herbert, who won AP NFL Rookie of the Year that season.

On the other side, the Patriots have already clinched a playoff spot but are still fighting for an AFC East title with the Buffalo Bills (10-6). Additionally, New England could clinch the No. 1 seed in the AFC with help from other teams.

Where will the @Patriots end up in the playoff standings 🤔 #NFLSeasonFinale

Led by rookie quarterback Jones, the Patriots have exceeded all expectations so far. After starting the season 2-4, New England rallied off their own seven-game win streak.

In a blowout win over Jacksonville last week, Jones broke the franchise record for touchdown passes by a rookie in a season with his 20th touchdown pass. Jones passed for three touchdowns in the game, putting his total at 21.

ESPN’s Football Power Index gives the Patriots a 66.5% chance to defeat the Dolphins. Additionally, ESPN’s PickCenter has the Patriots favored by six points with the over/under set at 40.0. Kickoff for Sunday’s game is set for 4:25 p.m. EST in Miami Gardens with television coverage on CBS.