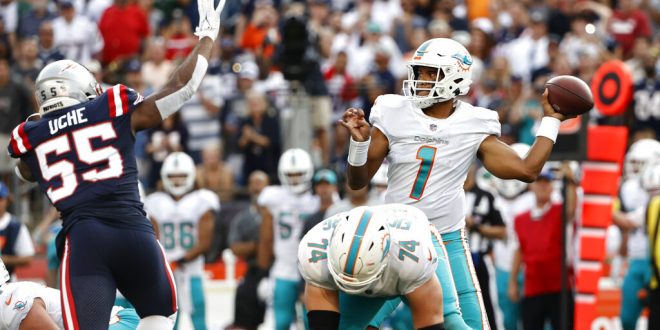 It was the Alabama quarterback battle of the century. Former teammates and now AFC East rivals, Tua Tagovailoa and Mac Jones met Sunday on opposing sidelines. Tagovailoa led the Miami Dolphins to a 17-16 win over the New England Patriots, spoiling Jones’ NFL debut. The last time two Alabama starting quarterbacks met in the NFL was Nov. 21, 1983, when Richard Todd led the New York Jets to a 31-28 victory over Ken Stabler and the New Orleans Saints.

Back and Forth First Half

The Dolphins secured the lead early in the first quarter. In 10 plays, Tagovailoa advanced Miami’s offense 80 yards before he rushed the ball three-yards into the end zone. Kicker Jason Sanders struck in the extra point, leaving Miami up 7-0 at 5:29.

The Patriots didn’t make it onto the scoreboard until the second quarter. Jones rushed New England’s offense 65 yards before kicker Nick Folk took over the field. At 10:17, Folk landed a 27-yard field goal to make it a four-point game.

Jones wasn’t done. Thirty seconds before the two-minute warning, Jones connected with wide receiver Nelson Agholor for a 7-yard pass to the end zone, the only touchdown of the game for New England. The Patriots now had the lead, 10-7. However, Miami’s response was swift. Tagovailoa was able to get the Dolphins within field goal range after 8 plays for 45 yards. Sanders launched a successful 48-yard kick between the goalposts to tie up the game at the end of the first half.

Second Half Mistakes Give Dolphins The Win

Miami’s offense came out of the locker with a fire lit under them. One of the top plays of the second half was on a third-and-eight attempt by Tagovailoa early in the third. At his own 27-yard line, the Dolphins quarterback threw to DeVante Parker. The wide receiver was able to keep his feet inbounds to further the Dolphins soon to be touchdown drive. The game-winning touchdown was scored by wide receiver Jaylen Waddle on a three-yard pass. Miami led once again, 17-10.

New England struggled to get anything offensively going throughout most of the third. The only scoring the team had was at the end of the third with Folk making a 42-yard field goal. The start of the fourth left the score 17-13 Dolphins.

Turnovers happened left and right for both teams at the end of the game. Folk once again proved to be the Patriots strongest offensive weapon as he completed an 33-yard field goal to make it a one-point game at 10:36. Jones gave New England fans hope late in the fourth after driving the Patriots to touchdown territory. A costly fumble by Patriots running back Damien Harris shifted control back to Miami, where the Dolphins ran out the clock to secure its first victory of the season.

Miami shifts its gears as it prepares to match up against the Buffalo Bills Sunday.

Kaitlyn Wadulack is a third-year journalism student specializing in sports and media at the University of Florida. You can reach Kaitlyn at k.wadulack@ufl.edu
Previous Saints Stuns the Packers 38-3
Next Jags Take the Fall in Week 1