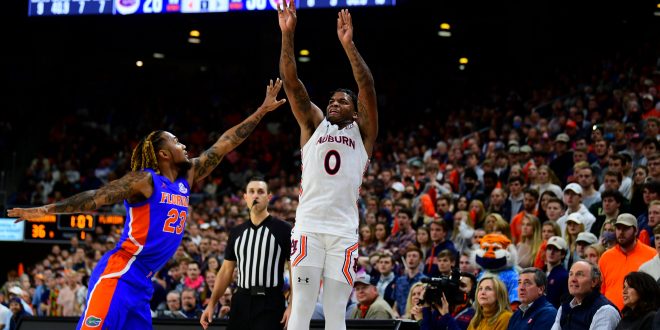 A late second-half push helps the Auburn Tigers (14-1, 3-0 SEC) defeat the Florida Gators Men’s basketball team, 85-73, at home. Coming into the game ranked No. 9 in the nation, the Tigers improve their winning streak to 11 games.

Smith, scored 13 points and five rebounds in 21 minutes of action.

Also, Auburn’s depth was just too much for the Gators to handle as they were outscored 35-9 in bench points.

Florida (9-5, 0-2 SEC) had their hands full keeping the Tigers off the glass. A problem that was existed in the Gators last outing with Alabama, the Tigers out rebounded the Orange and Blue 33-to-28.

In the first half, Florida was out rebounded by 19-to-11, committing seven turnovers and shooting 41.7 percent from the floor.

With 18:48 left in the first half, Tyree Appelby got the ball rolling for the Gators, draining a triple from a nice dish by Brian Mckissic. From there, a balanced offensive attack by the Tigers catapulted a 16-4 run.

After a media timeout, Auburn continued their offensive assualt with another 8-0 run to give them a 24-11 advantage with 11:46 left in the half. At that point, the Tigers has scored on seven straight field goals. Including, a Jaylin Williams triple at the 12:34 mark.

Then, Auburn goes nearly four minutes without scoring a point including four turnovers. The Gators capitalize with a 6-0 spurt which was capped by an Appleby steal which led to a lob to Anthony Duruji for the slam.

From there, the Tigers extended their lead to double-digits until a Duruji three-pointer with seconds remains before halftime.

Gators Comes Up Short at Auburn

Continued to fight, Florida stuck around in the second half. Appleby starts the half for the Gators cutting he deficit to six points. The senior guard ended with 11 points and season-high nine assist.

With 10:56 left in the game, Casteton comes up big for the gators with his fourth offensive rebound of the game with a put-back bucket. The basket cut the Tigers lead to just four, 56-52.

A few moments later, Duruji splashes from beyond the arc giving Florida a chance to come out of Auburn Arena with a win, only down one. However, the young star in Smith answers with a triple of his own with 8:22 left to bring the lead back to four, 63-59.

After a layup by Castleon to make it a two-point game, the Tigers ignited a 10-2 run, including a logo three-pointer by point guard Wendell Green Jr. Greens long range triple rocked Auburn Arena as it opened a 10-point lead with less than four minutes left.

From there, the Gators had no answers while the Tigers shot 53.6 percent for the game.

Now, coach White and the Gators looked to bounce back from this  performance as they look to get their first win in conference play. Florida will be back at home taking on another form of Tiger in LSU.