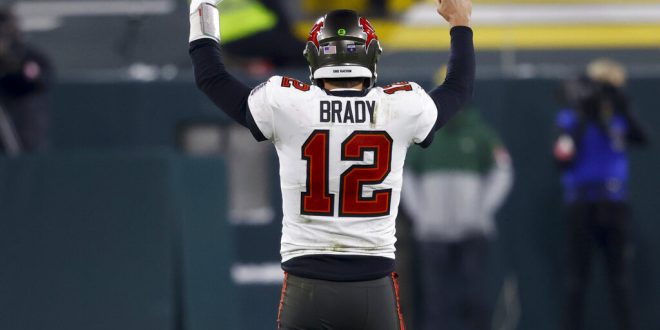 Postseason is underway as the NFC wipes slates clean and kicks off the race to Super Bowl LVI in the Wild Card round.

After 18 weeks, it’s Week 1 again. Throw all the regular season records and stats out the window. They now mean nothing. It’s time for the playoffs.

In the NFC, the Packers and Lambeau field hold the No. 1 seed. Ready to give Aaron Rodgers a run for his money are fellow elite quarterbacks Tom Brady, Dak Prescott, Matthew Stafford and Kyler Murray.

Brady will be playing in is 42nd career postseason game on Sunday.

Jalen Hurts will be playing in his first.

Even so, Brady isn’t laying off the gas.

“We’re going to have to play our best game of the year. This is the toughest opponent all year. We’re playing a team that’s very talented. Very healthy”

-Tom Brady on facing Eagles in playoffs next weekend pic.twitter.com/iwMhamBzG0

Ultimately, everyone knows what Brady brings to the table: he is a seven-time Super Bowl champion. Nevertheless, you play the game for a reason.

The Philadelphia Eagles are hoping to shock the world. The key? Their ground game.

The Eagles own the No. 1 run game in the NFL. Specifically, they are the first team in NFL history to have five players with at least 50 carries all averaging over 4.3 YPC. With Miles Sanders returning from injury, the team will have their full array of attack available.

The weather is expected to be 20-30 mph winds with a high chance of rain, which slightly favors the Eagles.

Beat the Rams on the road in Week 18? No problem. Heading into the final week of the season, the 49ers had to travel to LA and beat the Rams to punch their postseason ticket: they did just that.

Needing a win to make the playoffs, the @49ers engineered the biggest comeback of the Kyle Shanahan era.

The Niners trailed 17-0 in the second quarter before surging to a 27-24 OT victory and an NFC playoff berth. #FTTB pic.twitter.com/pAkzjPPxmJ

Now, they get to travel to Dallas to take on the Cowboys.

The Cowboys have had a great year, winning the NFC East with a 12-5 record.

That said, they have notably not won a Super Bowl in 20 years.

Coming up short on Sunday would mitigate all of their seasons success: it’s Super Bowl or bust.

The Cowboys will be hoping to ride Prescott’s hot hand, while the 49ers will be relying on Jimmy Garoppolo to game manage and their defense to step up.

After Week 8, the Cardinals and Rams seemed like the leagues best two teams.

The conversation around the league was for Kliff Kingsbury as COTY and Murray for MVP.

On the other side of the ball, the Rams were also 7-1, and had just made a big move to acquire Von Miller.

Then, Murray got hurt and the Cardinals season derailed. The Rams also proceeded to drop their next three.

Now, ten weeks later, the Cardinals are 11-6 and a wild card team.

Coming from the same division, neither team has anything to hide. They split the season series, making Sunday’s game all the more interesting.

In order to emerge victorious, the Rams will be need Stafford to correct his recently shaky play, and the Cardinals will need Murray to return to MVP form.

The Divisional Round will take place on Saturday, Jan. 22, and Sunday, Jan. 23. The Packers will host the winner of the Eagles. vs Buccaneers. The winner of the Cardinals vs. Rams game will advance to take on either the 49ers or Cowboys. The games are yet to be scheduled.

William Silverman is a junior at the University of Florida from Philadelphia who is interested in pursuing a career in business, communications and journalism.
Previous Gators Gymnastics Ready for ABC Meet
Next Previewing the AFC Wild Card Weekend