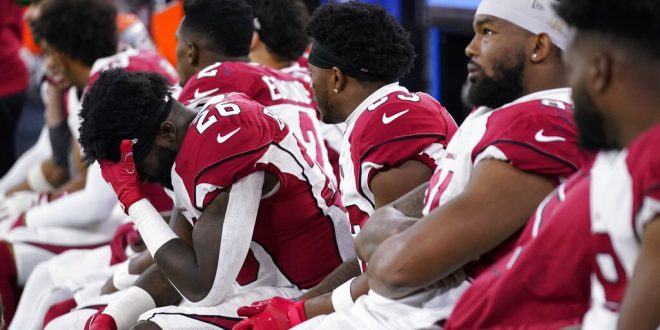 Arizona Cardinals running back Eno Benjamin, left, sits on the bench with teammates during the second half of an NFL wild-card playoff football game against the Los Angeles Rams in Inglewood, Calif., Monday, Jan. 17, 2022. (AP Photo/Jae C. Hong)

The Arizona Cardinals suffered a tough loss against the Los Angeles Rams on Monday 34-11 knocking Arizona out of the playoffs. After starting the year 7-0, the Cardinals won just four of their final 11 games. So what does this all mean for Arizona? Let’s talk about it.

How the Game Went Last Night

Arizona ended their season 11-7, including the playoffs, after their rough loss to the Rams last night in a blowout Wild Card playoff. Two quarters is all it took for the Cardinal’s to go from “sluggish start” to their season being over. During halftime, the scoreboard read 21-o with Matthew Stafford overpowering the game. Murray couldn’t seem to gather himself during his playoff debut after he gave the Rams a touchdown with a brutal pick-six as he was flung to he ground. This ultimately lead to their team’s loss.

Was it a failure?

Yes. J.J. Watt, Kyle Murray, Kliff Kingsbury, Christian Kirk, and many fans and news outlets believe so too.  This is what Murray stated in an interview.

Watt also responded by stating, “I mean, from what we were capable of doing and what we showed we can do, to what we showed today. There’s no other way to describe it than as failure.” We can blame Murray’s injury from earlier this season, we can point to Watt’s and Hopkins’ injuries, but ultimately these are just excuses for the downfall of the team under Kingsbury’s coaching.

It it not unfamiliar for Arizona to be blown out in the playoffs. In fact, they have only made to playoffs 6 times in 34 seasons during their seasons in Phoenix. They have appeared only once in the Super Bowl in 2008 and this was their first time since 2015 making it to the playoff’s. Over the past two years, the Cardinals are 0-5 in games when a a victory would have clenched a playoff spot. Now they are 0-1 in the playoffs. Unfortunately, they keep seeming to crumble in the second half of Kingsbury’s three seasons. In 2021, Arizona started 5-2 but finished 3-6. This season, they started 7-0 but shortly wounded up going just 4-7.

Clearly, the Cardinal’s biggest issue is that they can’t show up in big games. Kingsbury states that his priority is to find the reasons why his team collapsed again in the second half of the season.

We’ve got to work at it… We’ve got to talk about it and face it. All of us have got to look at ourselves in the mirror and figure out why it was like that because that hadn’t been us all year.