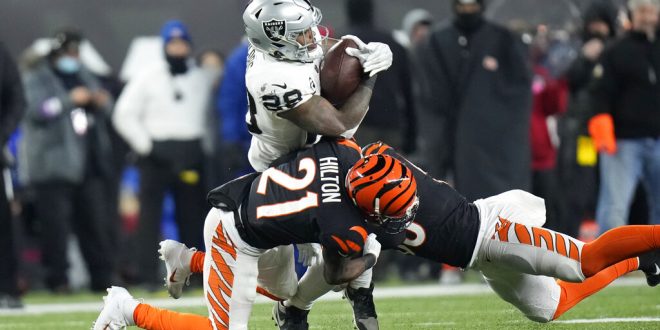 The Las Vegas Raiders were close-game hero’s in this wild 2021 season. They were the second NFL team to go 4-0 in overtime and were 7-2 in one-score games.

The Raiders won their final four games of the season to make the playoffs by a total of 12 points. However, on Saturday, the Raiders’ season ended with an interception near the goal line in the final seconds of the game.

Unsurprisingly, it’s been a quiet few days for the Las Vegas faithful since the Raiders’ season ended in a 26-19 Super Wild Card game loss at the Cincinnati Bengals.

All eyes are now on Raiders’ owner Mark Davis to see what he is going to do in terms of hiring a full-time coach to replace Jon Gruden, who departed the organization in October.

Raiders’ interim coach Rich Bisaccia met with the media in his end-of-season press conference on Monday. Obviously, the first question he was asked was if he has any clarity on his future. He does not.

Bisaccia said he has had some “conversations” with Davis and he expects to have more.

Bisaccia said he understands there is a “due process” and that Davis has to interview other people. In addition, the Raiders, like all teams, must comply with the Rooney Rule, by interviewing at least one minority candidate before hiring Bisaccia or anyone else.

As of now, Bisaccia is the acting head coach and he and his staff will continue to conduct reviews of the season through Wednesday.

From @NFLGameDay: The #Raiders will do a real and thorough search, and interim coach Rich Bisaccia will be a candidate. He has a chance. But if the season ends today, he won't go in as the favorite. pic.twitter.com/ImATxG0GGP

This season the Raiders to several late-game comebacks this season. Quarterback Derek Carr had the team in position to do it again in the playoffs against the Bengals. They were down by seven and driving deep into Bengal territory as the clock ticked down.

However, on a fourth-and-goal play from Cincinnati’s 9-yard line, linebacker Germaine Pratt intercepted Carr to seal the win.

Chase has a big game

The potential Offensive Rookie of the Year added onto his resume Saturday in dominant fashion. Ja’Marr Chase was Joe Burrow’s go-to guy from the get-go in the Cincinnati Bengals’ drought-destroying 26-19 win over the Las Vegas Raiders on Super Wild Card Weekend.

The rookie had in nine catches on 12 targets for 116 yards in the victory. In doing so, Chase broke the franchise record for most receiving yards in a playoff game. In addition, he logged the third-highest receiving yards total by a rookie in the Wild Card Round behind DK Metcalf (160) and Jeremy Maclin (146).

Too many field goals again

A lot of the Raiders’ issues in this game were season-long problems. One of them was red-zone production. They made it to the red zone five times and came away with one touchdown.

Daniel Carlson was his usual helpful self with four field goals, but the Raiders just couldn’t finish drives the way they wanted to. It was extremely fitting that the Raider’s ultimate demise was with them team in the red zone.

Carr on the red-zone issues: pic.twitter.com/Y6FyKS9TII

Undoubtedly, this is a key offseason for the Raiders. Questions loom about the roster on whether or not Carr and other key players from this years team will be there next year. Surely, whoever the next head coach is will play a key role in this decision. 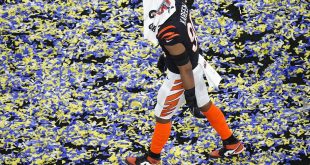 After reaching the Super Bowl for the first time in 34 years, Bengals fans gathered …