Tuesday night’s matchup between the Tigers and the Rams resulted in a 2-0 defeat over Columbia. After a quiet first half, Eastside punched in two second-half goals.

Columbia soccer was missing multiple players due to COVID-19 exposure, ultimately putting the Tigers in a difficult situation prior to their rematch against the Rams. The two teams met in December in which Eastside took that contest 4-1. Despite these adversities, the remaining starters and backups, who had to step up at the last second, put together a respectable effort.

The Tigers controlled the flow of the match in the first half, maintaining a conservative pace and focusing on their defensive efforts. As a result, they were able to keep Eastside off the board for the first 20 minutes, though they also failed to score during that time period .

“In the first half, we were really just trying to sit back and have a slow pace,” Columbia head coach Trevor Hickman said. “[We just] tried to play defensively, and the possession kind of balanced out.”

Neither side had particular offensive control, allowing the Tigers to put their game plan into full effect.

Coming out of halftime, Eastside gained offensive control of the ball and were more aggressive in their attacks. The Tigers created multiple opportunities for themselves on offense and recorded more shots on goal in the second half, but they were unable to convert any scoring chances.

“We were pretty good at … keeping the ball in our possession, but towards the end, we kind of lost that momentum,” sophomore Augustus Mock said.

Eastside, on the other hand, came away with two goals at the nine-minute mark and twenty-minute mark in the second half.

Both goals came from team captain Nio Suzuki, the latter of which even impressed coach Hickman.

“That last goal was just something special, all you can do there is just tip your hat,” he said.

Tuesday’s loss drops Columbia to a 6-10-2 record on the season. The Tigers will hope to finish their season on a high note in their final game on Thursday, Jan. 20 at 7:20 PM, where they will host the Forest Wildcats.

Jack Meyer is a first-year student at the University of Florida. He is majoring in Journalism and specializing in Sports and Media.
@jackmeyerespn
Previous Gators Hire Jay Bateman As New Inside Linebackers Coach
Next Billy Napier highlights phase one 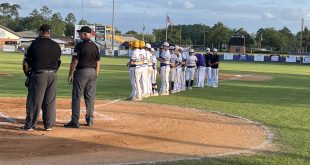