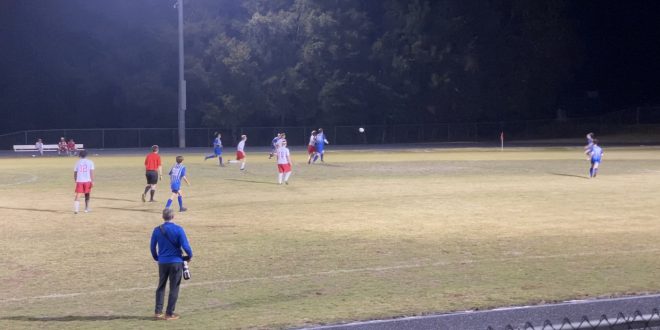 In a doubleheader on senior night, both Saint Francis’ women’s and men’s (3-4-1) soccer teams played against the Dixie County Bears (0-4). While the Bears have not won a game yet this season, they put up a hard game for the Wolves to win. After fighting tooth and nail with the Bears, the Wolves won 4-2.

Right at kick-off, Erick Rodriguez took possession of the ball and advanced towards the net, but he started to feel pressure from the Bears defense and passed it off to Michael D’Alessio. D’Alessio broke through the Bears’ defense a bit too aggressively and got a foul called on him.

The Bears took the free-kick and made it into the Wolves territory and scored.

The Wolves tried and tried to make advancements towards the goal, but kept getting called offsides. All the free-kicks the Bears took gave aided them in getting onto the Wolves’ side of the field. Owen Simmons however did all in his power to not let the Bears score again by cutting off fast breaks and clearing the ball out of the penalty box.

Eventually, Rodriguez and D’Alessio made their way down the field with the ball again.  Rodriguez passes the ball to D’Alessio and he scores tying up the game for the Wolves. Not even a few moments later, a teammate takes possession from the Bears and boots the ball to Rodriguez and scores. However, the referees called him offsides as he took the shot and they retracted the goal.

At the end of the first half, the score was still tied 1-1.

In the second half, Connor Naughton started to make a name for himself. He dribbled the ball down the sidelines, tricking the Bears into moving the wrong way and made it all the to the Bears territory where he tried giving it to a teammate to score.

The Bears passes the ball between each other making their way down the field, but Naughton stole the ball and passed it to D’Alessio to try and score.

At this point, the Bears start to make mistakes that aided the Wolves. One of them was that they got called on a handball inside the goalie box. Thomas Duarte took the free-kick for the Wolves; however, did not go into the goal because of the wall that the Bears built.

Handball by the Bears inside the goalie box gave the Wolves a chance to score, but the wall made by the bears stopped the shot. @GNVpreps @ThePrepZone @ESPNGainesville pic.twitter.com/98V5bWQV7F

D’Alessio broke the tie and right after the Bears tied up the game 2-2.

Receiving the ball from a teammate, Rodriguez went 1 v 1 against the Bears’ goalie and scored. Stealing possession of the ball, D’Alessio booked it down the field and assisted Naughton in a goal.

After Naughton’s goal, D’Alessio slowly walked to his side of the field hoping to run out the clock. Time running down the Wolves moved at their own pace when it came to throw-ins, free-kicks or goal kicks so that the Bears would not have enough time to score.

It ended up working out for the Wolves they wanted it to and they won 4-2. They meet up in another doubleheader against Dixie County with the women’s team on Jan. 10.