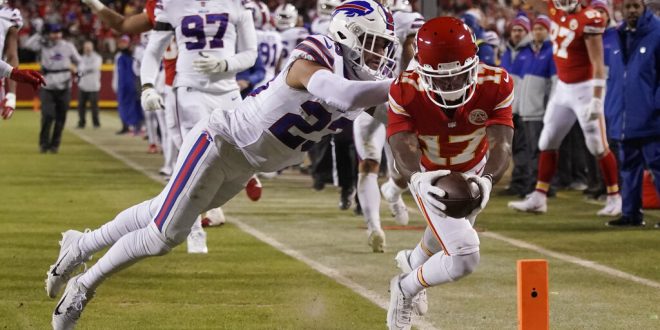 How much time is too much time for Chiefs franchise quarterback Patrick Mahomes? Certainly, Bills signal caller Josh Allen did everything he could after giving his team 36-33 lead with 17 seconds remaining. After a 19-yard strike to Gabriel Davis for his fourth (a single-game NFL postseason record) touchdown catch, it seemed the fat lady had sung.

Yet, it became clear, anytime is too much time for the 2018 NFL MVP. With 13 seconds left on the clock from his own 25 yard line, Mahomes bulleted a 19-yard dart to speedy wide receiver Tyreek Hill. Now with eight seconds remaining, he found a wide open Travis Kelce to get to the Buffalo 31 yard line, setting up a 49-yard field goal attempt for former Pro Bowler Harrison Butker. In the blink of an eye, the AFC power houses were on their way to overtime.

The Chiefs then proceeded to win the coin toss, going for an eight-play, 75-yard drive to win the game 42-36. Due to the NFL’s overtime rules, Allen and the Bills did not have a chance to touch the ball.

Bills and Chiefs scored 18 points in the final 1:13 of regulation.

Yet, the biggest takeaway of the night was the two quarterbacks. In Mahomes’ four seasons as an NFL starter he has evolved into one of the game’s best. Surely, this notion became legitimized when he won a Lombardi Trophy in 2020. The $500 million man proved he’s worth every penny Sunday, throwing for 378 yards and three touchdowns to advance to his fourth straight AFC Championship. Additionally, he had 69 yards and a touchdown on the ground. Astonishingly, he now has 25 touchdowns and five interceptions in 10 career playoff games.

However, if Sunday was any indication, Allen is not far behind his rival. On the night, the fourth-year signal caller threw for 329 yards and four touchdowns along with 68 rushing yards. Unlike Mahomes, the Wyoming product didn’t light the league on fire right away. Rather, he broke out in year three, losing to the Chiefs in the AFC Championship. Now one year later, the Bills have found the same fate after another phenomenal season from their QB..

It’s long been held the NFL’s overtime system is broken.

In 2017, the Falcons lost the Super Bowl 34-28 in one of the greatest collapses in Super Bowl history. One caveat though: they didn’t get a chance to touch the ball in overtime. According to the NFL’s overtime rules, if a team scores a field goal, the opposing team will get a chance to match that or win the game with a touchdown. Conversely, if the team scores a touchdown on its opening drive, the game is over.

The NFL's overtime rules are under fire after the ending to Bills-Chiefs, but @BillEnright has a solution pic.twitter.com/0cOR5ic1kZ

Such regulations prove crucial in these types of games. If Allen and the Bills had one more chance to touch the ball Sunday, who knows what could have happened. Yes, defensive fatigue is a major factor into Buffalo’s shocking loss. Still, in such a closely contested game, it’s righteous they get a chance to tie or win, just as the rules are in college.

The NFL has not made any comment on the current overtime rules. Time will tell if they will be amended due to the latest issue.

No ifs, ands or buts, the Bills are eliminated from the postseason. With a loaded roster set to return in 2022, there is no reason Buffalo can’t be back next season.

For the Chiefs, their Lombardi dreams remain alive. On Sunday, they will host Joe Burrow and the red hot Bengals in the team’s fourth straight AFC Championship. According to Draft Kings, Kansas City has opened up as a seven point favorite. On Jan. 2, Cincinnati prevailed in Arrowhead during the two teams only meeting of the season.

The Bengals travel to Arrowhead Stadium to take on the Chiefs Sunday at 3 p.m.

Sam Petosa is a Journalism major pursuing a Specialization in Sports and Media at UF. The South Florida native produces daily shows for WRUF, including "Sport Scene with Steve Russell, and "The Tailgate." In addition, Sam provides weekly sports updates for WUFT News and radio Sportscenter's for WRUF radio. Sam has been a writer at ESPN Gainesville since January 2020.
@sampetosa5
Previous San Francisco 49ers Advance
Next Magic upset Bulls despite 41-point outing from Demar DeRozan