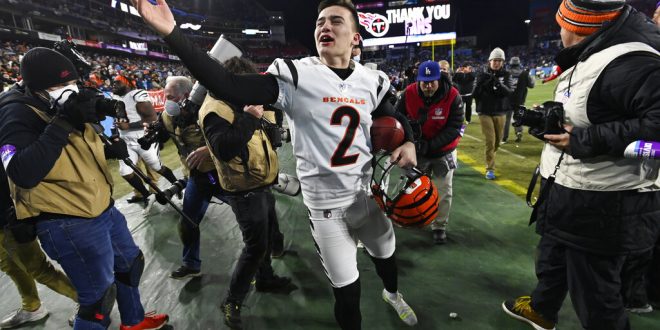 The Cincinnati Bengals defeated the Tennessee Titans last Saturday 19-16 in the AFC Divisional Round game. Evan McPherson, former Gator kicker, kicked a 52-yard winning field goal to end the game against the Titans tp push Cincinnati into the AFC Championship. This is McPherson’s 4th winning field goal, overall, this season. McPherson has been having an incredible year with the Bengals as his teammates and coaching staff have had so much faith in him.

Also, Bengals Quarterback, Joe Burrow, raves about the rookies kicking ability. McPherson’s confidence shows just how much of a great kicker he is.

Four made field goals, including the game-winner, on Saturday. @McPherson_Evan's leg is a big reason the Bengals are in the AFC Championship. pic.twitter.com/oMdq5R8Un9

Zac Taylor, head football coach of the Bengals, is confident in McPherson skills and believes that he could still make the kick from a farther distance. Taylor has so much faith in his kicker and likes McPherson’s is growth.

THAT'S WHY YOU DRAFT A KICKER!

Not many kickers get drafted but McPherson was picked in the 5th round of the 2021 NFL Draft by the Bengals. McPherson was a top kicker recruit in high school and his career long in college was 55 yards. In his NFL career, he has made 28 total out of 33 tries.

Cincinnati will play the Chiefs this Sunday on the road at 3 pm.