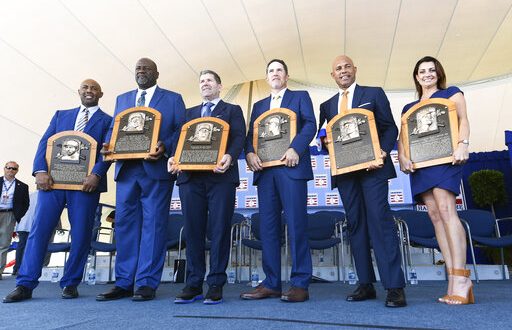 On January 25, the Baseball Writers’ Association of America will announce the results of its 2022 MLB Hall of Fame vote. This will be live from Cooperstown, New York on MLB Network. Electees will be inducted during Hall of Fame weekend on Sunday, July 24 at the Clark Sports Center.

In 2020, Derek Jeter, Marvin Miller, Larry Walker and Ted Simmons were among the Hall of Fame class. They were inducted on Sept. 8, 2021 after the 2020 Induction Ceremony was cancelled due of COVID-19. In 2021, there was no candidate to received the necessary 75 percent of the vote to enter into the Hall of Fame.

Seven-time MVP Barry Bonds and seven-time Cy Young Award winner Roger Clemens are on the ballot for their 10th and final year. In addition, candidates remain on the BBWAA ballot for 10 years if they are not elected. They must be named on at least five percent of all ballots cast each year.

Bonds played with the Pittsburg Pirates from 1986 to 1992. He played for the San Francisco Giants from 1993 to 2007. Bonds played 22 years in Major League Baseball as a left fielder.

Roger Clemens, who was given the nickname “Rocket,” played 24 seasons in Major League Baseball. Clemens spent time with the Boston Red Sox and New York Yankees.

Another 10th year name on the ballot is Curt Schilling. Schilling received votes on 71.1 percent of all ballots cast in 2021. Surely, there were only three other candidates to receive over 50 percent of votes. Bonds had 61.8 percent, Clemens has 61.6 percent and Scott Rolen had 52.9 percent.

Returning to the Ballot

There are 17 former players returning to the 2022 BBWAA ballot after receiving over five percent of the overall vote in 2021. Among some of these names are Omar Vizquel, a fifth-year who received 49.1 percent votes, and Billy Wagner, a seventh-year who received 46.4 percent votes. Some other familiar faces include Todd Helton, Garry Sheffield, Jeff Kent and Andruw Jones.

Should Andruw Jones be in the HOF?

Any candidate that receives votes on more than 75 percent of all ballots will earn election into the Hall of Fame.

Sammy Sosa, Schilling, Bonds and Clemens will be eligible for the HOF for a second time in 11 months if they are not elected for their 10th and final year on the writers’ ballot.

David Ortiz is on the ballot for the first time. Ortiz played 20 seasons with the Twins and Red Sox. Ortiz is a 10-time All-Star and a seven-time Silver Slugger Award winner. In addition, Ortiz is an eight-time winner of the Edgar Martinez Award. Ortiz was a member of the 2004, 2007 and 2013 World Championship teams with the Red Sox.

Alex Rodriguez, Tim Lincecum and Jimmy Rollins are also a few names that will appear on the ballot for the first year.

Coverage of the 2022 Hall of Fame announcement will begin at 4 p.m. on MLB Network. Results will be revealed at 6 p.m. by Hall of Fame President Josh Rawitch.