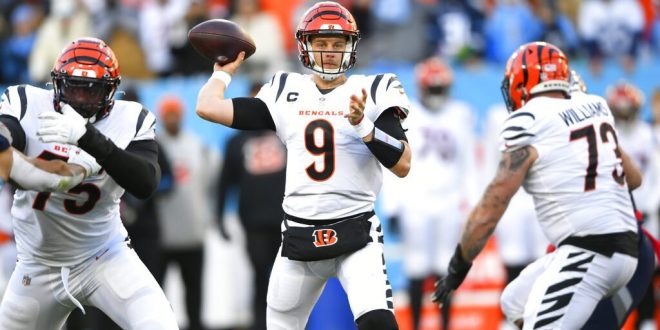 Cincinnati Bengals quarterback Joe Burrow (9) pases from the pocket against the Tennessee Titans during the first half of an NFL divisional round playoff football game, Saturday, Jan. 22, 2022, in Nashville, Tenn. (AP Photo/John Amis)

Cincinnati Bengals quarterback Joe Burrow has been a phenomenal player throughout the 2021 NFL season. His year has been historic, earning him multiple franchise records and conference accolades. Additionally, he helped the Bengals outplay the number one-seeded Tennessee Titans 19-16 on Saturday, earning a spot in the AFC Championship game. In just his second professional season, Burrow led the Bengals out of a 31-year playoff hiatus. With his impressive resume, we can expect great things from Burrow through the remainder of the season.

A Hard-Earned Divisional Round Victory

Burrow’s face-off with the Titans was not an easy win. He had to overcome nine sacks in the back-and-forth game to give the Bengals a shot. Cincinnati’s defense recorded three interceptions, including one in the last 20 seconds of the game. Then, Burrow worked quickly to move the ball down the field towards the end zone. Ultimately, the 52-yard field goal by Evan McPherson decided the win. However, Burrow has proven to be an overall great leader for his team. Even the NFL acknowledged his talent in a tweet after the game:

Bengals head coach Zac Taylor says Burrow is just a special player. In a post-game interview, he discusses the amazing job Burrow does at recovering from tough plays. He also credits him for leading the team back to the top, despite hard situations.

Overall, Burrow attributes his success to his confidence. He talks about the importance of believing in himself and his teammates in order to play well.

In the 2021 season, Burrow recorded 4,611 yards and 34 touchdowns. He also recorded a passer rating of 108.3 percent. Those all set new records for the Bengals. Additionally, he earned the fourth highest single-game passing record in NFL history, recording 525 yards this year against the Ravens. He led the NFL with a 70.4 completion percentage and 8.9 yards per attempt. Overall, his accomplishments led to him to be named to the All-AFC team by PFWA.

.@JoeyB and @Real10jayy__ were named to the Pro Football Writers of America's All-AFC Team!

Although Burrow’s season has been outstanding, it took a while for him to see these levels of professional success. In his senior year at LSU, Burrow led the Tigers to a 2020 CFP National Championship victory. He also collected the Heisman Trophy before being selected by Cincinnati as the first overall pick in the 2020 NFL Draft.

In, Burrow’s rookie season with the Bengals, he struggled behind a week offensive line, collecting 32 sacks. His season eventually ended early due to surgery for a torn ACL and MCL. However, he came back and fought hard this year to get the Bengals to where they are now. Burrow will next take the field on Sunday, January 30th, against the Kansas City Chiefs for the AFC Championship title. With his remarkable season so far, Burrow is giving the Bengals a chance at seeing Super Bowl LVI.

Previous Evan McPherson Leads Bengals to AFC Championship
Next Are the Bills Contenders for the 2023 Super Bowl?