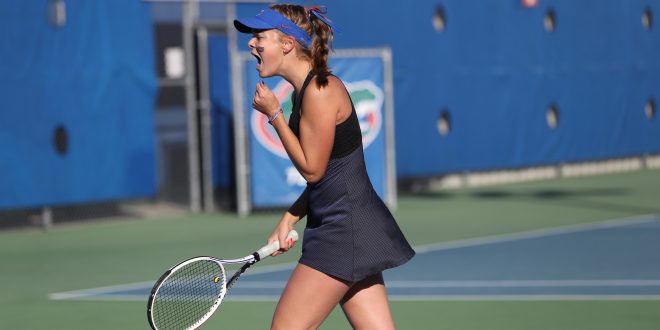 After defeating North Florida 6-1 the day before, the Gators came out strong at the Alfred A. Ring Tennis Complex. After the three doubles pairs set out to their court, they quickly earned a 1-0 lead after the team’s number two doubles team Bente Spee (freshman) and Marlee Zein (senior) went 6-2. Shortly after, the team’s number three doubles team Sydney Berlin and Sara Dahistrom finished off the doubles play by achieving a 7-5 win against Alexandra Mjos and Kiana Mokhtari.

In singles, McCartney Kessler, playing at the first singles and doubles position, took an easy victory over freshman Grace Schumacher (6-0, 6-1). Kessler, who opened the fall season ranked No. 4 in singles and No. 23 in doubles with Emma Shelton in the ITA Preseason National Rankings, had an outstanding season last year and has yet to fall short of her expectations. Finishing next, the team’s number six player Sara Dahistrom started 6-3 then crushed Margriet Timmermans 6-0. No. 34 Zein then succeeded in her match against Sierra Berry which brought in the fourth point of the match: 6-3, 6-3.

Sydney Berlin, playing Mjos again but in singles, clutched a 7-5, 6-1 win after a tight first set. Following after, Bente Spee went head to head with Laura Pellicer. Spee had a sluggish start after falling behind 5-2. She had a quick turnaround and defeated her opponent 7-5 in the first set. With confidence, Spee fought for a 6-2 win.

Last but not least, No. 87 Emma Shelton fought out a tough battle for the Gator’s to conclude their sweep.  Shelton fell short during her first match against Amelia Boy (7-6) but bounced right back in a dominant second set (6-2). This match ended in a 10-point third-set tiebreaker where Shelton held her composure and challenged Boy to a 10-6 victory.

When Head Coach Roland Thornquivist was asked about his overall thoughts against USF he stated, “I was really pleased. We had to problem solve and what we talked about after the match in the locker room was our ability to change tactically. You come out and you want to play a certain way, but for one reason or another it’s not working and you have to be able to change. I thought we had to do that on several spots because South Florida was coming at us pretty good. To our players’ credit, if you look at the scoreboards we had some close first sets, but most of the time we were able to navigate through those. That, then, allowed it to open up in the second. I was really pleased with our effort. We had to sit a couple of players today, so that gives everybody a chance to play over the two days and I’m very happy with the level of play and our attitudes and just overall, super pleased.”

The Gators (2-0, 0-0 SEC) have their next game on Saturday when they head to Florida State for the Intercollegiate Tennis Association Kick-Off Weekend against Florida International University.

Previous Are the Bills Contenders for the 2023 Super Bowl?
Next Missouri hosts newly crowned No. 1 Auburn