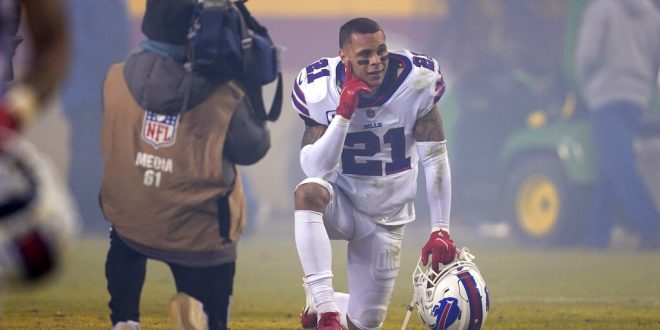 In this past weekends matchup between two AFC powerhouses between the Kansas City Chiefs and the Buffalo Bills, one team left with a sour taste in their mouth. The Chiefs defeated the Bills 42-36 in a overtime thriller.

Chiefs’ quarterback Patrick Mahomes made enough throws late to catapult the reigning AFC champs to defend their title against the Bengals this weekend. However, for Buffalo, quarterback Josh Allen was just as impressive.

This included what many thought to believe a game winning touchdown strike to wideout Gabriel Davis with 13 seconds remaining. Unfortunately, a Chiefs field goal (at the end of regulation) and game-ending touchdown in overtime cancelled any shot for an Allen rebuttal.

The 25-year old gunslinger talks about the crushing defeat.

Now, with the loss, where will Allen and the Bills go from here?

What’s Next for the Bills?

As Head Coach Sean McDermott and the Bills take a moment to evaluate their season entirely, there are some things to look forward to next season. For one, they are still expected to beSuper Bowl contenders next season looking to seek vengeance.

Similarly, the 2019 Chiefs squad lost in similar fashion to the Patriots in the 2019 AFC Championship Game. The following year, Kansas City bounced back, winning their first Super Bowl since 1970.

Lifting A Lombardi trophy would be an ultimate achievement for the Bills franchise.  In retrospect, a history of crushing defeats in the post season have ravaged this franchise. Including, Hall of Fame quarterback Jim Kelly struggled to bring championship success to the Bills.

But, for Buffalo, they will works towards finally overtaking the Chiefs as the team to beat in 2023.

Giants are expected to request permission to speak with former Dolphins' HC Brian Flores for their HC position, per sources.

Flores is from Brooklyn and Giants would represent a homecoming.

Giants also expected to speak with Dan Quinn and Brian Daboll, amongst others.

As every team in the NFL look for ways to improve, in a salary cap driven league, bringing all 22 starters back is a rare sighting. The Bills are no exception. For a talent perspective, Allen, Davis, Stefon Diggs, Tremaine Edmonds, and others are expected to return for title run next season.

But, the franchise will be in the lower third of the league in terms of cap space entering the offseason. So, fishing for highly sought after free agents may not be in the cards for GM Brandon Beane.

As a result, looking to enter into free agency, Emanuel Sanders could possible look elsewhere depending on offers presented to him.

On the defensive side, both defensive ends Jerry Hughes and Mario Addison are set to be on the market as well. Also, they combined for nine sacks and four forced fumbles.

The #Giants plan to interview #Bills OC Brian Daboll a second time for their head coaching job today, per source.

Daboll is the first known finalist for New York, which is also interviewing #Cowboys DC Dan Quinn today. Heating up.

In fact, one of  the biggest changes could be on the Bills coaching staff. Offensive Coordinator Brian Daboll is interviewing for a slue of head coach openings.

Including, a finalist in the New York Giants head coaching position. Some other opportunities may consists of the Broncos, Dolphins, and Raiders.

On the year, Daboll’s offense ranked as the third highest scoring offense in the league.