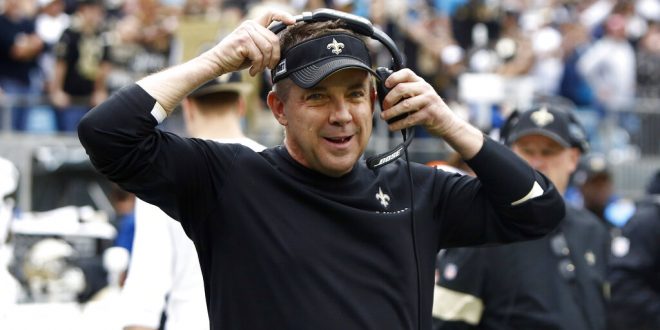 New Orleans Saints head coach, Sean Payton has announced that he will be not be with the organization next season as he is stepping down.

Payton addressed the public this afternoon in a press-conference held by the New Orleans Saints.

There has been speculation that Payton could pursue a media job. He addressed reports saying there has been no conversations in the industry in regard to a possible media job, but it could be an option.

Payton has also said that he could coach in the future.

"I don't know what's next," Sean Payton on his future pic.twitter.com/I6K8hoTua4

According to NFL Insider Adam Schefter, Payton met with the football staff this afternoon to discuss his decision.

Sean Payton met this afternoon for 35 minutes with the Saints’ football staff to let it know he was moving on. They told stories about the past, and reflected on what they accomplished. Payton told staff he has no current plans for the upcoming season. He has time to figure out.

How Sean Payton and the Saints did this year

In the 2021 regular season, the Saints went 9-8. In addition, the Saints are currently over $70 million the cap space. This could have been a motivating factor to Payton stepping away but no reports confirm this.

This past season was the first full season since quarterback Drew Brees retired from the Saints. Brees had been with the organization since 2006, the same year that Payton started with the Saints.

During the past season, the Saints suffered from many injuries and many players being in and out of health and safety protocols. In addition, there was no clear starting quarterback. The Saints bounced around between Taysom Hill, Jameis Winston and Ian Book as quarterbacks due to injuries. Winston suffered a torn ACL and a damaged MCL, according to the injury report on ESPN. Hill also suffered a left foot injury.

He has been the head coach of the Saints since 2006, winning multiple playoff games, NFC titles and one Super Bowl. Prior to the Saints, Payton worked with the New York Giants, Philadelphia Eagles, New York Jets and the Dallas Cowboys per the Saints website.

The California native has recorded 152 wins in his 16 years as a head coach.