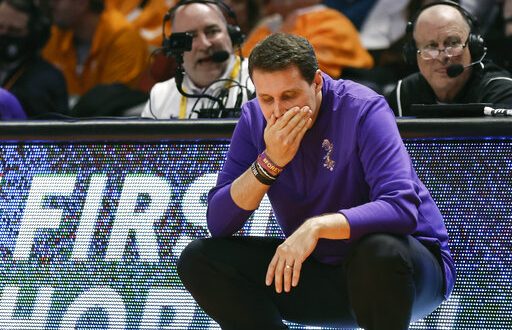 LSU head coach Will Wade reacts to play during the second half of an NCAA college basketball game against Tennessee Saturday, Jan. 22, 2022, in Knoxville, Tenn. Tennessee won 64-50. (AP Photo/Wade Payne)

The Texas A&M men’s basketball team faces the No. 19 LSU Tigers tonight at 9 p.m. Both teams have a 15-4 record in the season. The two are coming off losses; Aggies dropped 76-73 against Arkansas while LSU fell to Tennessee 64-50. Texas A&M sits higher in SEC standings, winning four out of its six conference games; LSU has won three out of four.

The Tigers have been ranked for the last eight weeks and rightfully so.

Forward sophomore Tari Eason transferred from Cincinnati to start the 2021-2022 season and has showed no remorse for LSU competition. Eason led LSU with 16 points against Tennessee Sunday and averages 16 points per game — compared to his 7.3 game-point average with Cincinnati last season.  He had an LSU career-high 23 points in the team’s 69-53 win against Georgia Tech Dec. 11. The transfer holds 288 points in the season.

Freshman Brandon Murray is also on the map for the Tigers. He came off a 15-point game Sunday and averages 9.7 points per game. The guard stacked up 19 points against Alabama Jan. 19, his career high.

.@Bmurrayyyy is making his name known.

Tigers head coach Will Wade isn’t worried about the upcoming game against Texas A&M. He views it as a possible learning opportunity.

"The best views come from the roughest climbs."

Though not ranked, Texas A&M is a vigorous team set to give LSU a run for their money.

Freshman guard Manny Obaseki is up and coming on the court. He made 19 points against Northwestern State Dec. 21 to make for his career high. He had seven minutes of gameplay in the 76-73 loss against Arkansas Saturday and had one rebound.

Aggies junior Tyrece Radford ran a brutal battle on the court Saturday against Arkansas with an 11-rebound season-high throughout his 37 minutes played. The guard has a season high 15 points — scored against Abilene Christian on Nov. 12 — and 41 minutes on court.

LSU senior guard Xavier Pinson is in recovery with an MCL sprain and a bone bruise. He suffered the injuries in the game against Tennessee Jan. 8. He has a season-high 17 points and averages 10.9 points per game. Senior forward Darius Days is also in recovery with an ankle roll from last week. He’s a human dynamo, serving an average 13.1 points per game with a 30-point season high against ULM Nov. 9.

Following Wednesday’s game, the Aggies travel back home to take on South Carolina Saturday. The Tigers will hit the road to face TCU in Texas Saturday.