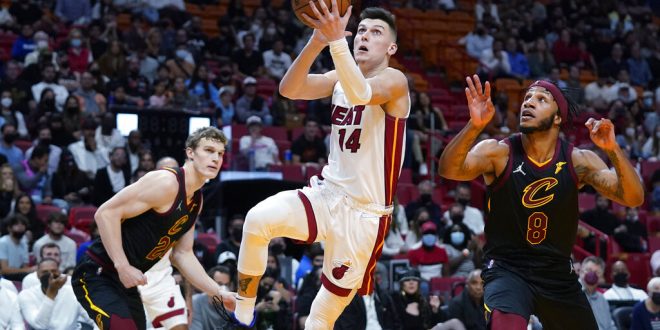 Miami Heat guard Tyler Herro (14) goes up for a shot against Cleveland Cavaliers forwards Lamar Stevens (8) and Lauri Markkanen (24) during the second half of an NBA basketball game, Wednesday, Dec. 1, 2021, in Miami. (AP Photo/Wilfredo Lee)

Duncan Robinson led the way for the Miami Heat on Wednesday night with 25 points. He was one of four Heat players to score over 20 points in the 110-96 victory over the New York Knicks.

Robinson and the Offense Heating Up

The Miami Heat were on fire from the tip. After shooting out to a 20-8 lead in the first quarter, the Heat didn’t look back. Miami never trailed or even tied for the remainder of the game.

Tyler Herro was hot off the bench for Miami. He added 21 points as the Heat maintained a steady double-digit lead throughout the game.

Our spark off the bench is back ⚡️ #6MOTYLER pic.twitter.com/HeU5GSglJP

Despite only scoring six points on the night, Miami Heat All-Star Bam Adebayo got the job done in other areas.

The Miami big man added 11 assists and eight rebounds to his stat sheet, along with a block and two steals.

The Miami Heat continued to light up the Knicks as Tyler Herro (21), Jimmy Butler (22), Duncan Robinson (25) and P.J. Tucker (20) all put up over 20 points. Tucker and Butler missed just three shots and one free throw combined. Miami shot 50% from the floor and just under 91% from the free-throw line.

Robinson led the way with an efficient night shooting of this own. The 27-year-old made seven of his 11 shots from three-point range.

The Best Offense is Good Defense

The key to Miami’s success wasn’t just their scoring, but their performance on the defensive end. The Heat kept the Knicks’ starters to just 49 points on Wednesday. Most importantly, they kept All-Star Julius Randle to just 11 points.

New York did receive some assistance from their 2020 first-round pick Obi Toppin. The 23-year-old forward showed off his ability from range, knocking down two of his three shots from behind the arc.

Toppin added a team-high 18 points off the bench for New York.

The 110-96 loss means the Knicks’ losing streak in Miami continues.

The Knicks are now 23-26 on the season and sit in 11th in the Eastern Conference. They will travel to Milwaukee to play the Bucks (30-20) on Friday.

The Miami Heat currently hold the best record in the Eastern Conference. They will host the Los Angeles Clippers (25-25) on Friday.

Chris Will is a second-year journalism student with a focus in sports and media. Originally from the Fort Lauderdale area, Will is now the beat reporter for Florida Gymnastics and covers all things sports in Gainesville.
@_Chris_Will_
Previous Tennessee uses second half to beat Florida
Next Tigers top the Aggies