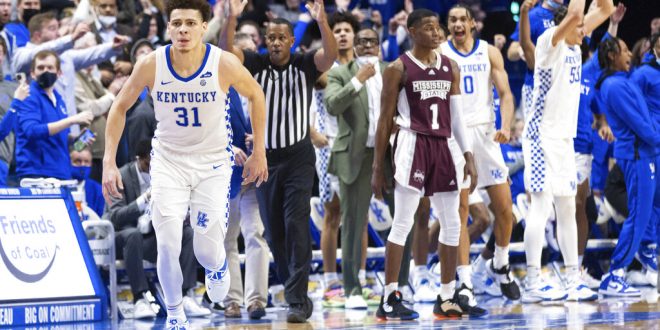 Kentucky guard Kellan Grady (31) runs back on defense while teammates celebrate in the background after Grady scored a three pointer to give his team the lead in overtime during an NCAA college basketball game against Mississippi State in Lexington, Ky., Tuesday, Jan. 25, 2022. (AP Photo/Michael Clubb)

The Big 12-SEC Challenge boasts two blue-bloods for its second-to-last game: the No. 12 Kentucky Wildcats and the No. 5 Kansas Jayhawks. John Calipari’s Wildcats (16-4, 6-2) are second in the Southeastern Conference, while Bill Self’s Jayhawks lead the charge in the Big 12 at 17-2, 6-1.

What more than pride and history on the line– a chance for either team to brilliantly beef up its NCAA tournament resumes and earn that dream No. 1 seed. Even more, there’ll be a battle between two major College Basketball Player of the Year candidates, Ochai Agbaji and Oscar Tshiebwe.

The sellout game will bring approximately 16,300 fans to PHOG Fieldhouse for tipoff Saturday at 6 p.m. Before that, College Gameday will host its show on the court in Lawrence, Kansas.

The last time Calipari and Self faced off was in December 2020. In that game, Jayhawks made a big comeback 65-62 to narrow the Wildcat series lead to 23-10.

Further, with Selection Sunday about a month-and-a-half away, both teams can make a case for a top tournament seed with a signature win.

With both teams ranked in the top 10 of the NET (NCAA Evaluation Tool) rankings, a No.1 seed is not too far away.

Aside from two non-conference losses, the Wildcats have lost two road matchups against No. 19 LSU and No. 1 Auburn. Squawking Saturday is the Wildcats’ chance for their first Quad 1 road win

Freshman guard TyTy Washington, the second-highest scorer on the team, left the game with a severe ankle injury. Despite concerns, leading scorer Tshiebwe predicted his teammate will be back for Saturday.

“I’m pretty sure TyTy is going to be with us in Kansas, and we’re going to be ready,” Tshiebwe said on Tuesday.

Clearly at this moment the leader for player of the year in college basketball is OSCAR TSHIEBWE of @KentuckyMBB @UKCoachCalipari OSCAR is the WINDEX MAN as he cleans the glass ! @JerryTipton @RexChapman @johnclayiv @rickbozich @HoopsWeiss @tsnmike

Washington’s 13.6 points and 4.5 assists per game would be a great addition to Tshiebwe’s 16.3 points and astounding 15.2 rebounds per game. The 6-foot-9 senior ranks fourth in Vegas Insider’s John Wooden Award odds.

Second in those aforementioned Wooden Award odds- Jayhawks senior, Agbaji. Agbaji leads his team with 21.3 points and five rebounds per game. Further, the guard is a major threat from the three-point line. He’s shot 47% on the season. He gets help from Christian Braun, who scores 15.3 points a game.

It's 2022. Your Jayhawks are battling in double overtime in a packed Allen Fieldhouse to remain at the top of the Big 12. Ochai Agbaji drops 37. Kansas wins.

Back in November, Kansas suffered an upset to Dayton via a one-point margin. No. 13 Texas Tech more recently defeated the Jayhawks on Jan. 8, before Kansas got revenge on Monday.

With potential March Madness payoff on the line, the ESPN Matchup Predictor gives Kansas a 63.2% chance of winning the game.

The game will be broadcast live at 6 p.m. on ESPN.