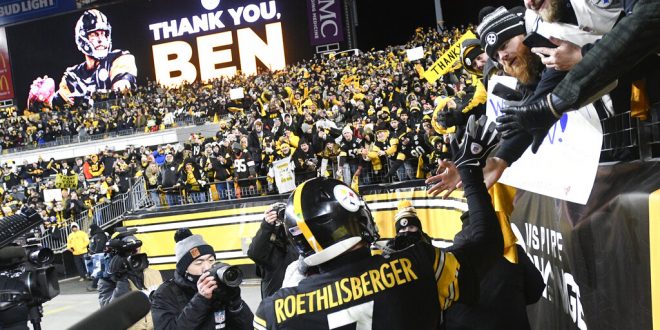 FILE - Pittsburgh Steelers quarterback Ben Roethlisberger (7) greets fans after an NFL football game against the Cleveland Browns, Monday, Jan. 3, 2022, in Pittsburgh. The Steelers won 26-14. Roethlisberger's NFL career is over. The longtime Pittsburgh Steelers quarterback announced his retirement on Thursday, Jan. 27, 2022, saying it was “time to clean out my locker, hang up my cleats” after 18 years, two Super Bowls, countless team records and a spot in the Hall of Fame all but secure. (AP Photo/Don Wright, File)

Shortly after the video was posted, his teammates, former teammates turned enemies before becoming friends again, and peers all showed their support.

In 2019, Smith-Schuster made the Pro Bowl after catching 111 passes for 1,426 yards and 7 touchdowns from Roethlisberger.

Roethlisberger and Brown combined for nine years to form arguably the best quarterback-wide receiver duo in NFL history. Brown eventually demanded his way out of Pittsburgh trashing Roethlisberger in the process. He later apologized.

Ben defied the TB12 Method in favor of the “Throw Some Ice On It” method his whole career, and ended up an all-time-great with 6 Pro-Bowls and 2 Super Bowls. There’s more than one way to bake a cake! https://t.co/ue36KXTHnk

Even while contemplating his own retirement decision, Tom Brady praised Roethlisberger.

Big Ben was drafted 11th overall during the 2004 NFL draft. Ahead of him, Eli Manning went 1st and Phillip Rivers went 4th. Now, all three are retired and likely to end up in the Pro Football Hall of Fame.

During his career, as aforementioned, Roethlisberger won 2 Super Bowls and 6 Pro Bowls. He also threw for 64,088 yards, 5th all-time, and 418 touchdowns, 8th all-time.

His 18 years with the Steelers are the longest a quarterback has played while spending his entire career with one team.

He never had a losing season.

For Big Ben, relaxation. The now former NFL player has nothing left to prove. For the Steelers, finding a new quarterback. Even so, it will be almost impossible to replace what Roethlisberger meant to the team, organization and city.

William Silverman is a junior at the University of Florida from Philadelphia who is interested in pursuing a career in business, communications and journalism.
Previous Special Teams Clench the Win For the Lightning
Next Gators Baseball Ready to Bounce Back from Disappointing 2021 Outcome