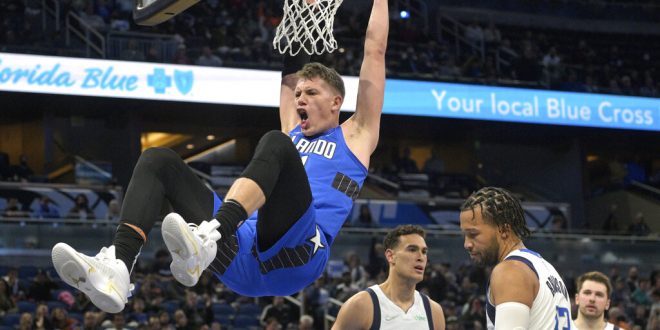 Magic hang on to beat the Dallas Mavericks

The Orlando Magic take down Luka Doncic and the Dallas Mavericks 110-108 in Sunday’s matchup.

Magic guard Cole Anthony scored the first two points of the game after driving to the paint for a layup. After the first four points, the Magic trailed for the majority of the first half. The Magic were able to make it a one-point game, 45-44 with six minutes left in the second quarter.  After an aggressive dunk from forward Franz Wagner, the Magic were able to tie the game at 54 with 2:30 left in the half and shortly after took a two-point lead. Going into the half, the Mavericks trailed by 5.

that was a high-scoring first half pic.twitter.com/krUM9hOiNm

Once again, Anthony scored the first two points of the half after an acrobatic move around two defenders for the tough layup. Shortly after, former Florida Gator Dorian Finney-Smith knocked down his third three-pointer of the game for the Mavs.  After a huge block from Magic rookie Jalen Suggs, Anthony was able to dump the ball off to Wagner on a fast break to extend the Magic’s lead to 11. Luka Doncic topped off the Mavs 10-0 run with a deep three-pointer to tie the game up at 79 with three minutes left in the third quarter.

The Mavs regained the lead after a slam from Marquese Chriss.  Anthony tied the game at 106 with a soft-touch floater with 3:25 left in the fourth. A loose-ball foul was called on Magic power forward Wendell Carter Jr. with 34 seconds left.  Finney-Smith made the free-throw to make it a one-point game with the Mavs down 108-109. Carter Jr. made his free-throw attempt to put the Magic up two points with 16 seconds left. After two unsuccessful shot attempts from the Mavs, the Magic were able to hang on and win by two points.

On to the next one. @Chime | #MFFL pic.twitter.com/uWEfFpH1d6

Despite the loss, Maverick’s star player, Luka Doncic racked up his 43rd career triple-double with 12 rebounds, 11 assists and 34 points. Magic forward Chuma Okeke put up 19 points, five rebounds, four assists and three steals. Both were the leading scorers for their team.

The Magic are now 11-40 on the season with a record of 5-18 at home after this win. They are now on a two-game winning streak and now sit at the 15th seed of the Eastern Conference. The Magic are 7-28 against conference opponents. This loss put the Mavs at 29-22 on the season. They are currently the sixth seed in the Western Conference and are 22-12 against conference opponents.

The Mavs will host the Oklahoma City Thunder on Feb. 2 at 8:30 pm. The Magic will look to keep their win streak alive as they take on Zach Lavine and the Chicago Bulls on the road tomorrow at 8 pm.

Previous Will San Francisco’s Jimmy Garoppolo Play In 49ers Jersey Again?
Next The Rams Rally Late to Beat the 49ers